What question would you ask the class if you were going to conduct a survey to find out:

What if your survey included all students in the school and your numbers were large, how could you display the data for large numbers? Discuss the use of symbols e.g.10 symbols can represent 100.

Draw one car on the whiteboard. One car = 10

What number would be represented now?

Change the number of symbols to 4, 8, 11, etc. and students determine the matching number.

Repeat, but change the key so that one symbol equals 5 (or 20) and students determine the numbers for 5 cars. Ask the class what the symbol of a car could represent. List the students' suggestions on the whiteboard.

Students suggest other symbols that could be used to represent transport themes.

Display a variety of tables, with larger numbers for students to discuss.

This table records the number of tourist buses visiting a town in one year. Tourist Buses Table

1. Students will use the information to complete a picture graph showing the bus arrivals during the year.

Before they start discuss the following points: 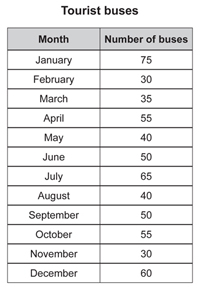 2. Students are given this template of picture graph to graph the bus arrivals during the year. They use the key because there are a large number of buses to record on the graph. Students draw half a bus for numbers like 15, 25, 35 and 45. 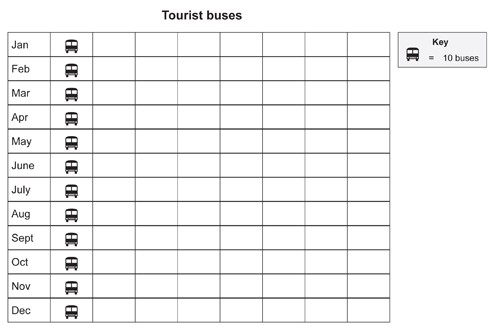 Each symbol drawn on the graph represents 10 buses. Half a symbol represents 5 buses

When students finish their graph, they:

This table records the predicted weather in each of the capital cities on one day in February. 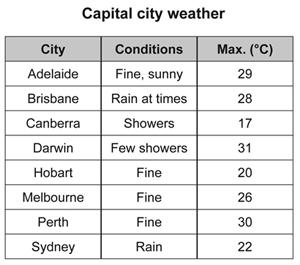 1. Students will use this information and the template below to complete a column graph, which will show the predicted weather in each of the cities.

The markers on the vertical axis are 5 numbers apart.

2. Students use the information in the table to complete the column graph by drawing the missing columns, giving the graph a title and labelling the axes. As the maximum temperature for some of the capital cities lies between the intervals on the temperature scale, students will have to measure the height of the columns carefully.

Students will use information in a table to present a graph, of their choice. The table shows data from the 2012 Olympic Games medal tally and ranks the top 20 medal-winning countries.

The 20 most successful nations at the 2012 London Olympic Games

Students work in pairs and discuss how they will present their information as a graph. Brainstorm some of the decisions that will need to be made. The following points could be used to stimulate discussion:

Students construct their graphs either on paper or on computer and print a copy.

When their graph is complete they could present it to the class using these questions as a guide.

Graphs are useful because they present information clearly and simply. After they have presented their graph, each student writes 3 -4 facts that their graph provides. 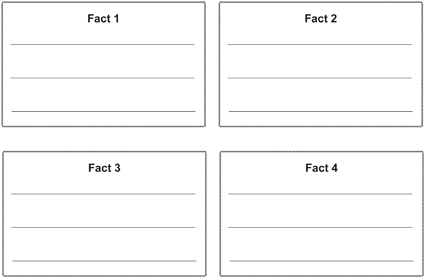 Introduce this activity to the class by saying:

This activity requires your detective skills to analyse the information provided in a graph and do some clever problem solving. Your assignment is to work out what this graph could be about because some vital information is missing.

To carry out this investigation you need to look at the column graph below which displays some 'Mystery Data'. 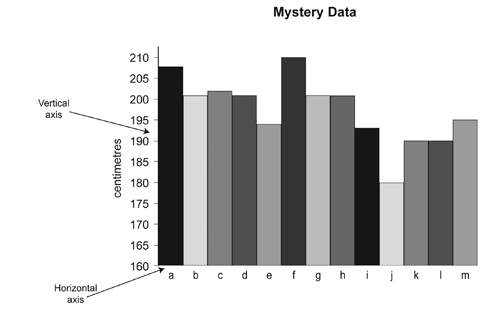 By studying the graph you can see that:

After carefully analysing the graph, students decide what the title for this graph could be and record their suggestions and reasons.

(Activity 6 can be used as an assessment task.)

Students are given the results of a school survey and asked to:

Students can survey the class on other suitable topics and present their graphs on computer using Excel. They can use symbols from the Internet or clip art to represent their data.