Solve simple probability problems; use practical activities to investigate possible outcomes and chance; conduct an experiment; determine if a game is “fair”; collect data and record in a table; interpret data including the range, mode, mean; display data in a line graph; state and apply the rule (definition) for probability

1. Students brainstorm the different ways we can describe the chance of something happening. Encourage students to think of both words and numbers to describe probability. 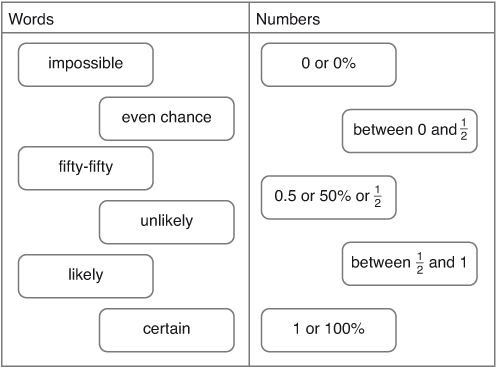 Place these cards in order from 0 (impossible) to 1 (certain).

Students think of events to match each of these labels: impossible, unlikely, even chance, likely, certain.

A bag has 10 coloured balls. The balls are blue, red, green or yellow. Complete the number line to show the probability, expressed as a fraction, of taking out different combinations of balls.

3. Students list all the possible outcomes when a standard six-sided dice is rolled. Using this dice, they determine the probability that the result will be an odd number, a number greater than 4, a multiple of 2, a prime number, etc.

5. Use the Spinner series learning object to explore basic concepts, language and reasoning related to chance. Students build their own spinners and investigate what colour the pointer lands on. 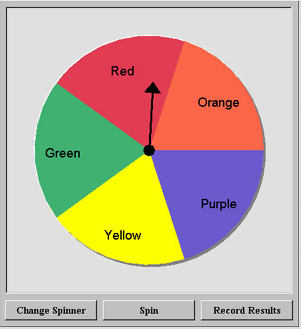 1. The teacher challenges the students to a dice game. Two dice are rolled.

The game is played 20 times with the total recorded each time.

The teacher tells the story:

Two students decide to invent an addition dice game, where they are sure to win. Before they invent the game they decide to determine the odds. Students roll two dice 20 times. They add the numbers shown on the two dice, tally the results and record the chance of each answer occurring e.g. 6 occurred 3 out of 20 times.

Students construct a game where they have a greater chance of winning using two dice which they have designed. They explain and discuss the approach taken in constructing their game.

Students invent a multiplication or division dice game where they have a greater chance of winning.

1. Introduce activity with a demonstration of the game: rock, scissors, paper.

Help students to determine the range, mode and mean for each set of data. Compare the results. 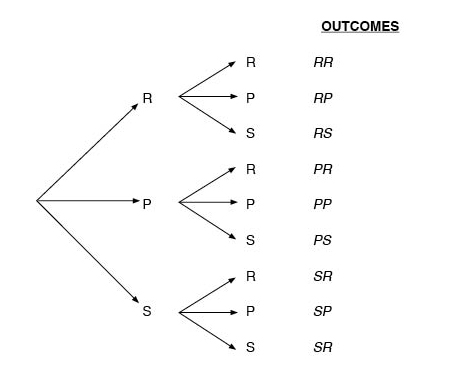 2. Compare the mathematical model with what happened when students played the game.

3. Use this as an introduction to a unit on probability.

Follow up with a discussion about how probability is used in daily life.

As a class, discuss: