Distinguish between certain and uncertain events; use chance terms to describe the likelihood of events happening

In the Number strand of the mathematics syllabus students are required to investigate situations involving chance.

In teaching about chance it is important that students:

The teacher prepares sets of cards describing a variety of events. Students, working in pairs, classify the events under the following headings: The event is certain; the event is impossible and the event could happen. 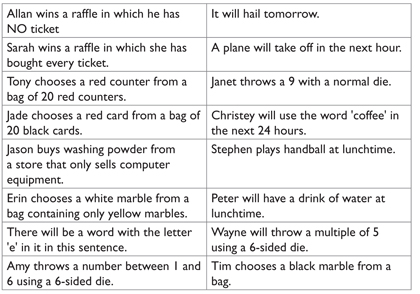 1. The teacher introduces the concept of a cline using an example in a familiar context e.g. temperature. 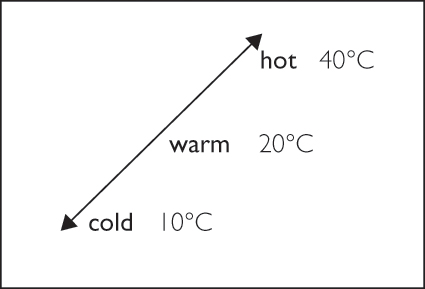 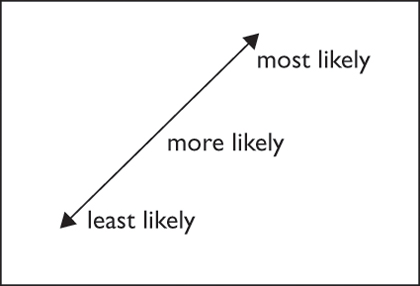 Each set is placed in a bag or box. The teacher demonstrates by pulling out one item from a set without looking. This is repeated a number of times, returning the object that has been pulled out each time.

The teacher tallies the results on the board and students interpret the results by asking questions such as, Which counter was I most likely to pull out?

The teacher adds data to cline by recording the probability of each colour being chosen (1 chance, 2 chances etc.).

The teacher makes tokens for free ice-creams, free yoyos and free movie passes in three vastly differing amounts. Students in groups take turns at pulling tokens out of a container. After each turn students record the results by putting a tally mark on a grid. (see example below)

At the end of the Lucky Dip, the students tally the results and record totals. Students then circle the statement that determines the probability of each token being chosen.

The teacher prepares a small bag of jellybeans containing three different coloured jellybeans. One colour has to be a large number, one a medium-sized number and the other a small number. Then students complete a cloze describing the contents of the bag and predict which colour jellybean is more likely/least likely to be drawn out.

3. Students are presented with cards containing terms often used when describing situations involving chance. In pairs or small groups, discuss the meaning of the chance terms and place these cards in order from least likely to most likely.

4. The class plays a variety of games to demonstrate the principles of chance and help students to make predictions. It is important that the teacher listens to the student's use of language to assess their level of understanding.

a) The teacher rolls a die. Students are asked to predict answers to questions such as:

b) The teacher has 5 blue, 4 red and 3 green counters in a box. Students are asked to choose a colour from red, blue, green or white.

The teacher says, I have a box with 12 counters. You score 5 points each time I take a counter in your colour out of the box. (The counter is returned to the box after the colour is noted.) Repeat the activity 6 times. Students are asked to predict what colour counters are in the box and decide if the game is fair. 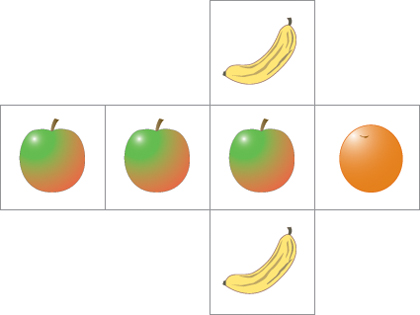 After a number of rolls, the students compare the results with their predictions. Students discuss whether their predictions were supported by their experiment and explain the differences between expected results and actual results in this simple chance experiment.

How can we change the labels on the die so that the orange is most likely to be rolled? The labels are then changed accordingly, and the die rolled a number of times to compare the results with the students' predictions. Students are encouraged to make other suggestions about altering the labels to change the outcomes and these suggestions are tested.

ACMSP047: Identify practical activities and everyday events that involve chance. Describe outcomes as 'likely' or 'unlikely' and identify some events as 'certain' or 'impossible'.

ACMSP094: Identify events where the chance of one will not be affected by the occurrence of the other.