Activities to support the strategies

In mathematics, students are required to round numbers to the nearest ten, hundred or thousand when estimating. There is an emphasis on number sense, confidence and competence in using mental, written and calculator techniques. It is important that students can approximate and estimate successfully when dealing with problems in everyday life, especially involving money.

The following activities will allow students to develop their skills in approximating, estimating and rounding.

1. Ask students to give estimates in practical situations, such as:

Students make the number cards 0 to 9 and select four, five or six cards.

a) Students use the cards selected to:

b) Students use the cards to create four-, five- or six-digit numbers then:

Repeat these steps with another random allocation of cards.

Give the following cards to students 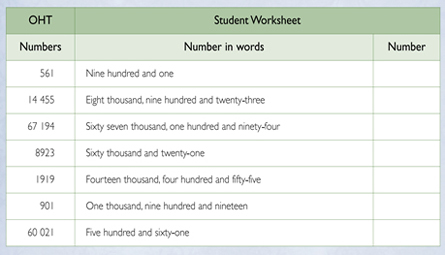 Students in pairs/groups cut up the numbers and paste them onto the correct words as below.

Students discuss what negative numbers are and when they are used. Collect examples from books, newspapers or the internet, such as:

Hang a 'washing line' across the classroom. As a class activity, students use the following cards to correctly position numbers, including negative numbers, on a number line.

These steps can be repeated using cards with negative fractions, decimals and mixed numerals.

ACMNA124: Investigate everyday situations that use integers. Locate and represent these numbers on a number line

MA3-4NA: Orders, reads and represents integers of any size and describes properties of whole numbers.