In Stage 1, the concept of equality and the understanding that the equals sign also means 'is the same as’ is important. Students need to see the 'equals sign’ like a balance or a set of scales; both sides need to total the same amounts.

At this stage, students need to start building their understanding of patterns for individual numbers and be able to list all possible combinations. Knowledge of number combinations is the foundation for seeing numbers as flexible. This understanding has strong links to addition and subtraction and can be applied to develop strategies such as; counting on and off the decade, bridging to ten, using related number facts, jump and split strategies.

1. Students are allocated a one- or two-digit number and a set of objects, such as counters or cubes and paper. They are asked to show their number in as many different ways as possible and using any of the objects provided - in words, in diagrams, in numbers and using the objects. In small groups, students describe the different ways they have recorded their number, e.g. the number 10 can be shown as

2. Students use cubes or plastic squares to build a staircase pattern. They draw, count and record the number of squares used in the pattern. Ask questions about the pattern the students have made.

4.The teacher builds the pattern, using buttons or counters.

Continue the pattern by adding more terms. Use a sheet of card to cover one of the middle terms.

Ask: How many buttons in the shape I have covered? How do you know?

1. Arrange individually numbered cards in a row from one to twelve, face down. Turn over a sequence of four cards at a time asking students what numbers they can see, what numbers are hidden and what the next number will be. Model mathematical statements using students' contributions to explain the patterns created, e.g. start at 4 and turn over every number card when you count by four.

2. Construct a wall chart of key phrases used in number patterns. Discuss the meaning of the phrases using a number chart and write examples next to the phrases.

3. Provide pairs of students with a set of directions for making patterns (using phrases listed on the wall chart) and a number chart. One student reads the direction for making a pattern from the number chart while the other student follows the direction and makes the pattern using counters or writing numbers.

4. Students work in pairs to construct a pattern on a number chart using blank cards and Blu Tack to cover the numbers. Students refer to the wall chart of key phrases to assist them in writing the directions for their pattern.

5. Students use the musical counter learning object to explore repeating elements in patterns. Students make sound patterns by following a rule starting from a given number on a number line. Other sound patterns can be added using different musical instruments. 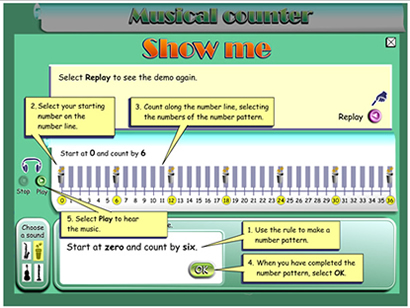 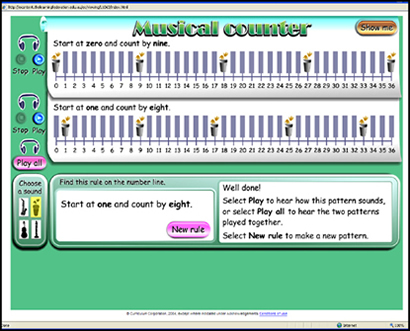 ACMNA026: Investigate number sequences, initially those increasing and decreasing by twos, threes, fives and ten from any starting point, then moving to other sequences

MA1-8NA: Creates, represents and continues a variety of patterns with numbers and objects.

Includes an interactive lesson which looks at patterns, where they occur and how they repeat.