Use a range of mental strategies for addition and subtraction, including the jump, split and compensation strategies; explain and record methods for adding and subtracting

In the NSW Syllabuses for the Australian Curriculum, Mathematics K-10 requires students to use mental strategies such as jump, split and compensation strategies to add and subtract up to 4-digit numbers. Before introducing a range of strategies, teachers need to establish how students would typically work out the answer using their own mental strategies.

Example: Students may use a variety of strategies to solve the following addition.

A student who says '38, 39, and 40’ is counting by ones. Such students need to be taught what a representation of 38 and 23 looks like using concrete materials to represent tens and ones. This will help build their understanding of place value and how numbers are structured. 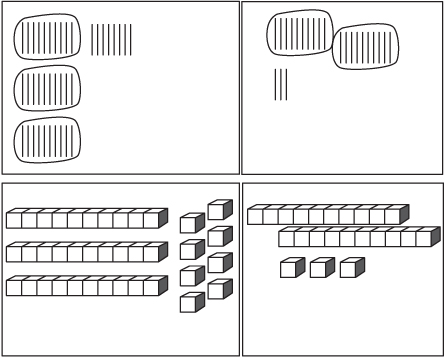 Students then need to be taught how to manipulate the concrete representation using different strategies including:

When children understand how these strategies work using the concrete representations they are able to mentally manipulate the groups. This underpins using mental strategies.

Some activities for developing mental computation in addition and subtraction are detailed below. 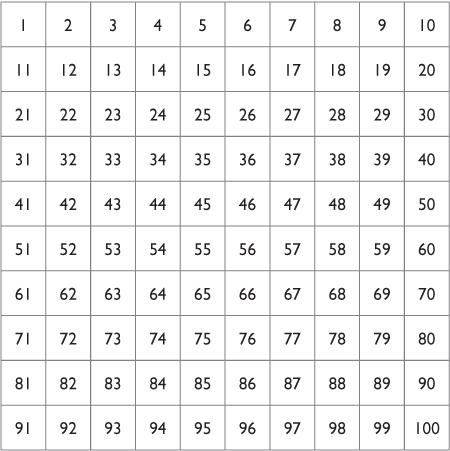 Deadly player no: 1: If a player rolls two 6's during their turn, they immediately turn over all the dice to the other player, losing their turn.

Deadly player no. 2: If a player rolls three 6's during their turn, they not only lose their turn, but they go back to the start.

Encourage students to move through the hundreds chart without counting by ones. Ask questions that encourage students to see the partitioning of numbers. That is, if they are on 27 and they have a score of 9, ask them 'how many do I need to get to 30?' (3) and 'how many left over?' (6), 'so go to 36'.

As students get more confident on jumping through the hundreds chart, introduce the empty number line as a method of scoring.

This is a good game to reinforce the strategies students use to move around the hundreds chart. Follow similar rules to those described in Red and Black Variation 1 or 2, but each player has a hundreds chart as a game board and they start the game by placing their game piece on 50. (Transparent counters allow players to see the numbers.)

Pose this problem to the class:

I solved a subtraction task but I can only remember the answer. It looked like this: 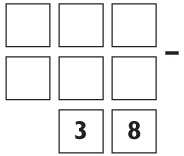 Students determine some of the possible numbers and describe how they worked them out.

ACMNA054: Recognise and explain the connection between addition and subtraction; ACMNA055: Recall addition facts for single – digit numbers and related subtraction facts to develop increasingly efficient mental strategies for computation. ACMNA083: Use equivalent number sentences involving addition and subtraction to find unknown quantities. ACMNA080: Solve problems involving purchases and the calculation of change to the nearest five cents with and without digital technologies