Use the following suggested target language to describe the effects of flips, slides and turns.

The teacher demonstrates and describes what happens to a shape when it is flipped across a line (flip needs to be demonstrated with a solid shape or a picture on an overhead). 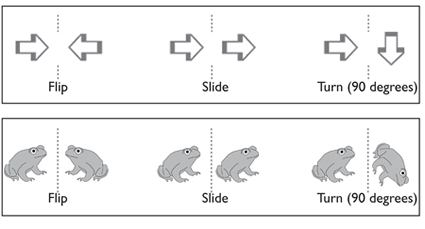 In pairs, students choose a shape and practise flipping, sliding and turning the shape.

Students identify how the shape was moved and draw what happens after the shapes crossed the dotted line.

Example of target language: If the triangle is flipped over the line then it will look like this.

Students hypothesise about what these shapes would look like if they were flipped across a line, then draw what they believe the shape will look like.

2. In pairs, students brainstorm all the places around the school where you might find a flip, slide or turn pattern, e.g. rows of bricks, patterns on a carpet, tiling patterns.

Students look around the school and try to find an example of each type of pattern – a flip, a slide and a turn pattern. They should draw part of the pattern and write where they found it.

The teacher displays the following shapes on an overhead projector. Ask students to name each shape and identify what these shapes have in common. Write each of the labels on a card. 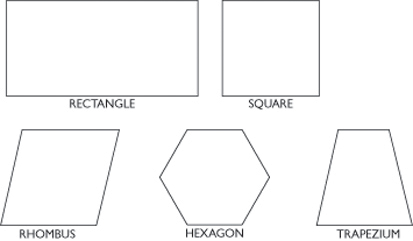 The teacher draws a Venn diagram (reference Mathematics K–6 Syllabus, p.117) to demonstrate that the shapes above are part of a group called quadrilaterals. As the class works through the following definitions the Venn diagram will be completed. 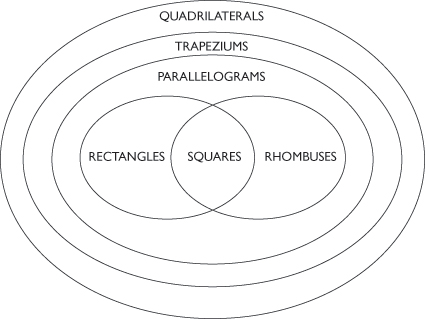 The teacher reads the definition of a quadrilateral, i.e. any four-sided figure and asks students to identify which of the five shapes fit that classification. As the students determine that a shape fits this classification, they name it and place it on the diagram in the quadrilateral section.

Note: All five shapes will fit the quadrilateral classification.

Note: All five shapes will fit the trapezium classification.

Note: All shapes, except the trapezium, fit the parallelogram classification.

Teacher supports the students to interpret the diagram and make mathematical statements to classify quadrilaterals, e.g.

Note: For more advanced students the language can include the properties of each of these classifications in the description, e.g.

Students complete a worksheet in which they have to identify how each shape is classified. 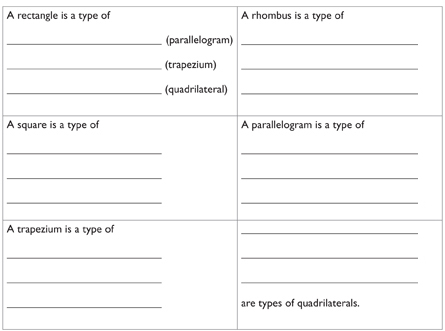 Using the completed table students write a short description to classify each of the shapes.

The students can follow similar activities to explore other polygons using the polygon chart below.

These activities can then be repeated using the chart below. 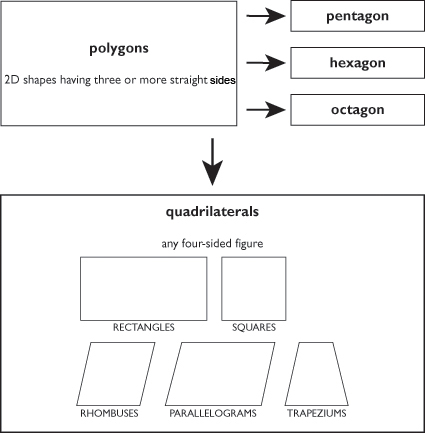 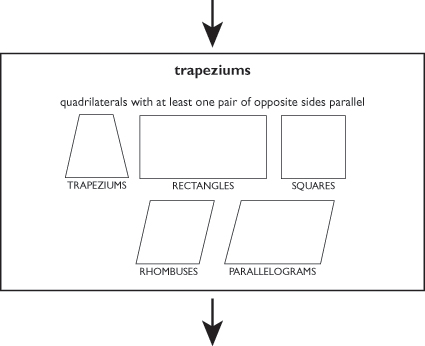 1. Students are given a worksheet with a variety of 2D shapes. They cut out each shape and fold it exactly in half in as many ways as they can.

On each of the cut outs, students draw the line of symmetry along each fold line.

Students complete the table to record whether each of the shapes is symmetrical and indicate how many lines of symmetry each shape has.

Students discuss the information. Compare the shapes with the same number of sides. Ask questions such as:

2. Students trace around a circular container and cut out the circle. They

Have students explain how many lines of symmetry they think a circle has.