A right angle is an internal angle which is equal to 90 degrees.

Angles can be measured using a protractor.

Show students that a right angle can be in any orientation or rotation as long as the internal angle is 90°. 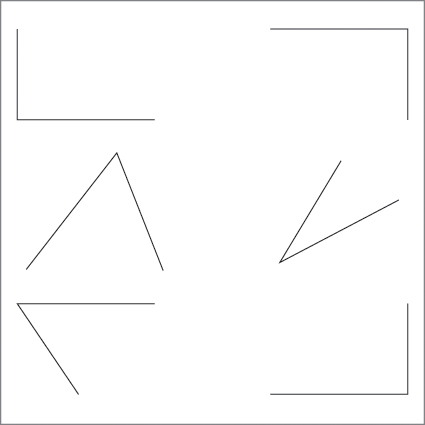 Students shape parts of their body to make different types of angles, e.g

The teacher provides a copy of this picture of a body. Students draw the arms and legs on their picture to show different types of angles.

Ask students to find real life objects at home which have angles such as: tools, pliers, clamps, can openers, tongs, crushers, nut openers.

Identify the parts of an angle - the arms and the vertex.

2. Introduce the names for the other types of angles - acute, obtuse, reflex, straight, revolution.

Students identify and record the different types of angles found in the environment. They describe the angles they have classified, e.g. All these angles are acute because (answer). Draw each type of angle and label the arms and the vertex, or list examples in a chart.

Students could match these descriptions to the correct label by colour coding or by playing matching games with a partner. 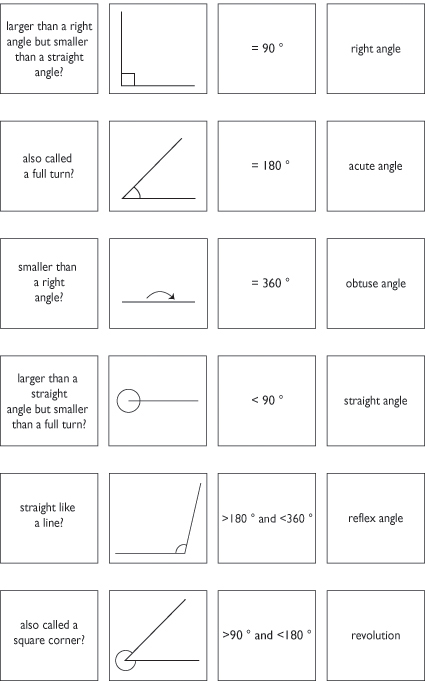 1. Students look for pictures of or collect different types of protractors.

Students discuss how to construct a protractor using a semi-circle of cardboard without using another protractor, for example, which angles could be immediately marked on the semi-circle?

In pairs, students construct and compare their protractors.

Use the constructed protractors to measure and record angles within the room. Students could also measure objects where the angles can change, such as scissors or a folded card.

Students compare their construction with a real protractor. 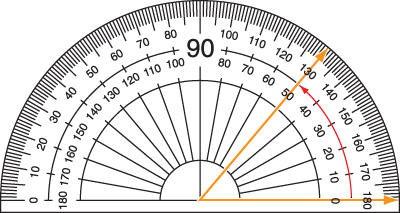 Students who have vision impairment

Examples and non-examples should be printed in bold appropriately sized, clear, bold numerals. Black on white is most effective.

If the student has been prescribed a low vision distance aid encourage them to use it. Students who have difficulties with distance vision should be given an on desk copy of the examples and non-examples in large print.

Students who use Braille

Provide tactile versions or use real objects with angles, including right angles. These can be used as a worksheet for students to label or measure.