Spelling is a complex aspect of literacy that needs to be taught explicitly and systematically. Students at the Foundation stage use phonics and their beginning phonemic awareness to identify sounds in words and to understand that sounds are represented by letters in written words.

In order to spell, students should be taught to vocalise words and spell words phonetically (as they sound) using their letter sound knowledge. For example, a student in Kindergarten might spell ‘caught’ as ‘cort’.

At the beginning of the Foundation year, students need to be explicitly taught the letters and common letter sounds of the alphabet. Engage students with regular learning experiences to consolidate phonological knowledge and develop phonemic awareness.

In Kindergarten students may have limited print literacy and EAL/D students’ language backgrounds may not feature the same sounds as the English alphabet. Do not rely on prompts such as: ‘Sound it out’. Teach students to listen for sounds as you say the word normally, elongate the word or chunk syllables. Try to avoid added emphasis to individual sounds… e.g. saying ‘meh’, ‘ma’ or ‘um’ for ‘m’.

It can be done in a whole class or small group context.

This exercise can be a whole lesson, a regular literacy activity, a lesson break or writing warm-up to support students’ familiarity with building words using letter sounds. 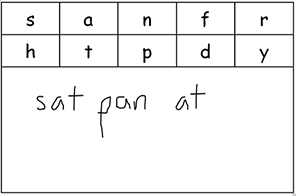 ACELA1758: Expressing and developing ideas: Know that spoken sounds and words can be written down using letters of the alphabet and how to write some high-frequency sight words and known words.

ENe-2A: Outcome 2: composes simple texts to convey an idea or message (ENe-2A) - Understand and apply knowledge of language forms and features: know that spoken sounds and words can be written down using letters of the alphabet and how to write some high-frequency sight words and known words.