Often when students start with the subject their sentences begin to sound monotonous and the sentences do not flow well. The aim of these activities is to avoid the subject-verb pattern. (For example: I love shopping. My friend and I will go shopping all the time. We love to buy clothes. She likes buying jeans.)

The following activities need to be explicitly taught – modelled, guided and then independently applied – as a tool to improve students own writing as well as a way to analyse texts.

You’ll notice in the examples above that this construction must employ dependent clauses, relies on parallelism, and expresses conditions dependent upon the main clause.

This is a special pattern that should be used sparingly. It is particularly helpful:

Use the following ideas to explicitly teach to, then modify student / teacher selected sentences with small groups, whole class or for independent editing.

Original Sentences: Elizabeth walked briskly to the movies. She wanted to see the new Despicable Me.

Use the proforma ‘independent and dependent clauses’ cut in half.

Students write either a dependent or independent clause (as per the sheet) on it and pass it to the next person in the small group. When all the spaces have writing on them students then write up as many humorous sentences with the ones off the sheet. The aim is to pace the clauses in as many as possible places. Students then select the best from theirs to write up onto a large cardboard strip to be displayed in the class. The posters may be useful. 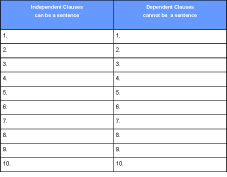 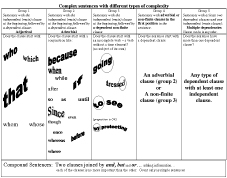 The “S3 Game for grammar and punctuation” cards need to be printed, laminated and cut up. Students in a group of ten (or five and they have 2 each) take one of the cards. The student with the ‘start’ card calls out their card and the person with the answer responds. This continues until everyone has had a turn. 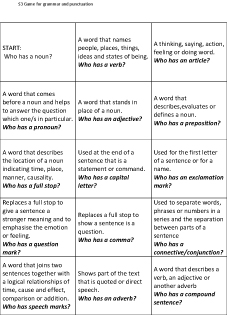 Using the resources Sentence types explicitly teach and then use the resource either as an assessment gathering tool or as an opportunity for students to work as a guided group. 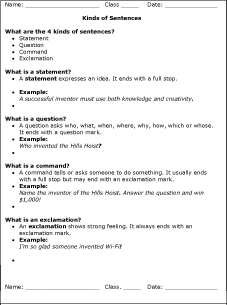 ACELA1534: Recognise and understand that subordinate clauses embedded within noun groups/phrases are a common feature of written sentence structures and increase the density of information

EN4-3B: Uses and describes language forms and features and structures of texts appropriate to a range of purposes, audiences and contexts.