In technical, scientific and mathematical writing the logical relationship between the items that the conjunctions connect is not made explicit and introduces comprehension complications. These writing genres bring the challenging elements of unfamiliar vocabulary including jargon and technical words, lexically dense sentences and an element of ‘guessing’ or interpreting the data in relation to the task. For many students the concepts or subject matter are unfamiliar and therefore problematic. For example:

This PowerPoint, developed by teachers, may be useful in helping your student understand how complex sentences are constructed. Simple Complex sentences (PPTX 1616.82KB)

Activity 2: innovating on authentic texts and using students' own work

Use the Embedded clauses - primary resources (DOC 134KB) to initially teach from and then to practice in small groups. 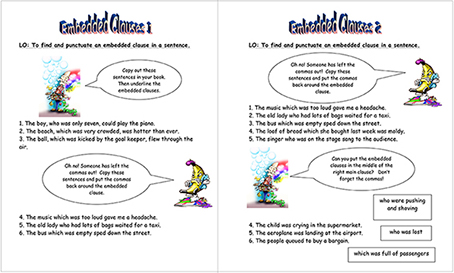 Using the Sentence work games (PDF 413.73KB) cut up and laminated, firstly explicitly teach using them and then using one or more dice have groups of students either orally or as a written activity follow the game rules.

ACELA1522: Investigate how complex sentences can be used in a variety of ways to elaborate, extend and explain ideas.

EN3-6B: A student uses knowledge of sentence structure, grammar, punctuation and vocabulary to respond to and compose clear and cohesive texts in different media.