Encouraging students to talk about the language in written texts, especially picture books, is an effective way to develop this understanding and at the same time develop their ability to code switch between the two dialects. To teach these differences teachers will need to be careful not to correct students spoken language but instead give students opportunities to use standard Australian English for purposes where that dialect is the most appropriate one to use.

Students will need to be taught metalanguage to describe the language features they will be discussing.

Finite verbs are central to a clause and therefore to sentences. The finite verbs are the element that express what is happening in a sentence and locate it in time (tense). In broad terms the tense will be past, present or future, for example ‘Sarah laughed’, ‘Sarah laughs’, ‘Sarah will laugh’. Tense should be consistently used in texts, that is, if a sentence starts in the past tense it should end in the past tense. However, different tenses can be used in one sentence if there is a specific time shift, for example, He was late and I will get the blame because I gave him the wrong directions.

Participles (present participles ending in –ing or past participles such as seen and done) do not locate a verb in time and in standard Australian English they need a finite component to indicate when the event happens. For example, the participle running needs the finite auxiliaries was running (past), is running (present), will be running (future) to indicate when the running occurred. Similarly, although done is a past participle, it can be used with a future tense auxiliary, ‘It will be done later.’ Point out that the verbs to do and to see are irregular verbs because the past tense (did or saw) is not formed by adding –ed. This distinction is difficult for students who speak Aboriginal English or a working class dialect where it is normal to say, He done it and I seen it when he done it, instead of the standard Australian English, He did it and I saw it when he did it.

NB: Participles ending in –ing without auxiliaries can be used as adjectives and be participants in sentences, for example, She was a cleaning lady. Cleaning was her job.

Verbs occur both as single words and as verb groups. Verb groups can contain two or more verbs and are sometimes called complex/compound verbs. They can also include non–finite verbs (for example, to jump in ‘is going to jump’).

The irregular verb cards show the present tense of irregular verb alone first, allowing students time to discuss/write the versions before clicking to show the example with the past tense answers. 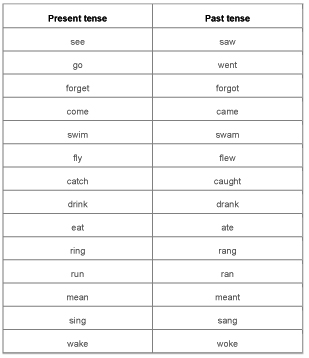 Verbs have a subject and must agree with their subject in number. For example: He bakes. They bake. Verbs can also have an object, for example, He bakes cakes. They bake cakes.

The subject is understood to be ‘you’ in a command, for example, ‘Bake a cake’.

Working with a partner students either answer orally first and then write responses. Have two cubes (with one of these word endings ____ed, has____ed, is____ing, was____ing, ____s, will____ on each face. The other cube has regular verbs – at first be careful not to use a verb that needs a doubled consonant before adding the ending or that needs an –es ending instead of –s. Students throw both die and then say the word and what tense it is. When both agree that it is correct they write the word with its ending on a personal whiteboard or piece of paper. Students identify the tense and use the verb in a sentence to a partner. After students have become familiar with spelling rules for adding endings to regular verbs ending in silent ‘e’ or single consonants, you can use those regular verbs on the regular verb dice, for example, verbs like catch, love and pat.

Ensure students use iPads with a partner to encourage discussion around how to use apps and write the text to go with them. This kind of exploratory talk will develop students’ spoken language. Students could record themselves reading their own text written for an audience requiring standard Australian English but related to their interests and backgrounds. For example, a text to go on the school website recounting an event (past tense), creating a community brochure for tourists (present tense) or a text arguing a case for upgrading a local park or building a skate ramp (future tense). Scenarios like these will make the text more meaningful and significant. Students in pairs watch/listen to their reading, discuss the wording and then edit the text based on appropriateness for the audience.

Most nouns add “s” if there is more than one object

A regular verb adds “s” when it has a singular subject.

Consider how you can include any of the following 8 Ways of Learning for Aboriginal students (8ways.wikispaces.com) in your teaching strategies:

These 8 ways can be considered more simply as:

ACELA1482: Understand that verbs represent different processes, for example doing, thinking, saying, and relating and that these processes are anchored in time through tense.