While simple sentences are important in grammatical analysis facilitating explanation and development of other sentence structures, their usage and study is critical in Stages 2 onwards due to the expanding lexical density and the unpacking of complex ideas required in nonfiction texts. Nonfiction texts studied at this level may have simple sentences, with very complex ideas, that are often several lines long. The analysis and therefore improvement of writing complex and compound sentences and how language is structured in quality texts can be studied in terms of simple sentences (or in terms of independent clauses). Commands and questions are also explained through changes to simple sentences.

A basic simple sentence consists of a main clause (an independent clause). It has one verb and a subject, and it may have an object that expresses a complete thought. Sophisticated Structures include – Extended simple sentences, for example ‘Like all living things, animals have personalities too.’

There are four clause structures – Statements, Command (or imperative), Exclamation and Question. Questions can also include a simple sentence with complexity: a question tag. The word group normally tagged onto a statement in order to signal that a reply or response is required is known as a question tag, for example ‘You are going tomorrow, aren’t you?’, ‘Move over, can't you?’ Question tags are used in spoken English but not in formal written English. They are a way of asking the other person to make a comment and so keep the conversation open. To make a tag, use the first auxiliary. If there is no auxiliary, use do, does or did. With a positive sentence, make a negative tag and with a negative sentence, make a positive tag.

While a simple sentence conveys information quickly, too many simple sentences – without complex ideas, can make the reading / writing appear choppy and disconnected. Writers with advanced linguistics use a variety of sentence structures – including simple sentences.

Fiction authors will make use of simple sentences, often reducing the complexity of ideas, to allow readers to move quickly through text. Simple sentences are frequently used when moving towards the action / climax of the piece. At this point complex or compound sentences could detract from the tension, conflict and / or action.

Example of simple sentences with an object

Simple sentences are unpacked with examples and opportunities for students to develop their own examples.

Students are placed in three groups. Each group is given a card to develop about ten examples of the language feature on their card. These words are written onto cards and illustrated (optional). Using the SVO cards students then create funny sentences.

The words can then be enlarged and placed next to the following sentence feature headings, but it is better if headings are arranged horizontally and words placed below. 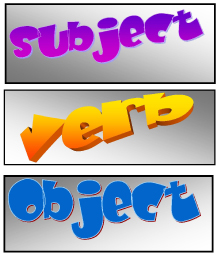 An adverbial phrase or clause contributes additional information to the main clause. Generally, these will answer the questions:

Example of simple sentence with adverbs and adverbial phrases to increase its descriptiveness:

Students use the SVO sentences they created and in small groups think of adding more information to the Verb by asking the questions how, when and where and building the simple sentences together. Sentences are shared and explained using targeted metalanguage to describe the grammatical features chosen to improve the sentence. For example:

How – quickly, When – in the morning, Where – along the bush track.

In the morning the children walked quickly to school along the bush track.

Students can play with the adverbial words and phrases by experimenting and moving them around the sentence. For example:

The children walked quickly along the bush track to school in the morning.

To add suspense: Quickly, the children walked along the bush track to school in the morning.

Students decide which sentence they like best and explain why. “I like the sentence where we added the adverb at the beginning because it makes the sentence suspenseful and more interesting to read.”

(spelling words can be generated from grammar rules)

A student selects or is given a verb (an action) to act out in front of class or small group. The student then secretly selects from a list of class generated “how” adverbs. The student acts out the action using the manner selected whilst others guess the adverb. For example: eating crazily, walking drunkenly, talking quickly, blinking rapidly, skipping happily, typing leisurely, searching carefully, moving secretly, etc…

Students find adverbial phrases (worksheet (PDF 136.12KB)) and then write the question that the sentence answers. 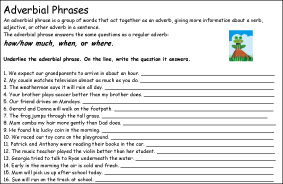 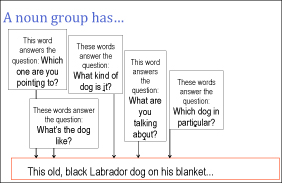 The I Spy game and instructions suitable for Stage 2 and 3 can be accessed at http://www.learnnc.org/lp/pages/3779

Students use the SVO sentences they created with the added adverbial words and phrases and think of adding more information to the Nouns by using descriptive words to expand the noun group. Sentences are shared and explained using targeted metalanguage to describe the grammatical features chosen to improve the sentence. For example:

In the morning the children walked quickly to school along the bush track. (Simple sentence with adverbials)

Teacher provides students with questions to ask and to answer such as:

What kind of track is it? narrow and sandy

On a dark and gloomy morning the excited, young children walked quickly to their small country school along the narrow, sandy bush track. (Simple sentence with expanded noun groups)

Quickly, the young and excited children walked along the narrow, sandy bush track to their small country school on a dark and gloomy morning.