Students need to elaborate and extend their ideas to make a detailed, precise and coherent piece of text. The use of a variety of sentence structures including extended simple sentences, compound sentences and complex sentences create texts that are more interesting and paint a more vivid picture in the reader’s head. Students are able to confidently enhance their writing by understanding how sentences are structured for effect.

What is a clause

There are two types of clauses:

This scholastic website has excellent resources for teaching students how to recognise a sentence and help them avoid the problem of run-on sentences. www.scholastic.com/teachers/classroom_solutions/2011/02/compound-sentences 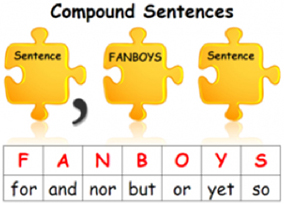 Put students into groups of 3. Give each group two large sheets of construction paper in two colours, scissors and a marker. Instruct your students to choose one sheet of paper and cut it into long strips. Give the class an overall topic such as “walking the dog” or “your last birthday party”, and ask each group to write 10 simple sentences on the topic.

Next, instruct them to create shorter strips with the other piece of construction paper and then write out as many connecting words as they can think of. Remind them of the acronym FANBOYS to recall coordinating conjunctions: for, and, nor, but, or, yet and so.

In the last part of the exercise, ask each group to choose two sentence strips and a conjunction to create a compound sentence and read it to the class. This exercise can be repeated until all the sentences are used by all the groups.

This hands-on activity presupposes that students already have been taught the difference between a dependent and independent clause and know the definition of a compound sentence.

Prepare index cards that have various words as different parts of speech: nouns, verbs, conjunctions, prepositions, and so forth. It will be helpful to label each word as a particular part of speech, since words will vary as parts of speech, according to their usage. Put a selection of index cards in bowls, and assign kids to groups of 3, 4, or 5. Using any game that works on a points system, instruct students to play the game, but instead of receiving points, they receive index cards pulled randomly from the bowl. The first person to create a compound sentence wins, and part of the fun is seeing what kind of silly sentences students will create.

Write a paragraph with short choppy sentences. Each sentence should contain one idea, and the entire paragraph should be about one topic. Create groups of 4 students, and distribute sentence-strip paper. Ask students to work together to rewrite the paragraph using compound sentences. Ask them to write each compound sentence on a strip of paper. Using one of the walls in the room or large sheets of butcher paper, have each group hang their sentence strips.

ACELA1481: Understand that a clause is a unit of grammar usually containing a subject and a verb and that these need to be in agreement.