Analysing quantitative data can take many forms, from looking at a graph to complex statistical research. This page sets out a few key principles that are relevant to all forms of quantitative analysis.

Download a print version (PDF, 330 kB) of the guide to quantitative data or view the online version below.

The single most important thing about statistics is that they must be treated with caution and thoughtfulness.

Most of the measures we are using in an educational context (like test scores) are imperfect indicators of something we are interested in but can’t directly observe – how much a student knows or has learned or a student’s engagement or wellbeing. Our measures are imperfect because they can be affected by many unpredictable factors or events. For example:

Some of these are likely to affect outcomes of individual students, while others might affect classes or the entire school. If we are interested in things like how effective the school is in imparting skills and knowledge, then none of these causes are especially meaningful to us. We should pay attention to what the data is telling us, but be prepared to take it with a grain of salt.

Sometimes changes in individual students can have large effects on aggregate scores for the whole school. For example, take a very small school that only has six students in each year – two students around the minimum standard, two students in the middle of the NAPLAN band range and two near the top.

Because there are only six students, the absence of one student is going to make a big difference to the average score in those years, particularly because the absent student had very different scores from the average. It’s important to note that the scores for the participating students might still tell you some useful things about those individuals and their learning. The issue we have is generalising from these results to how the school is doing as a whole.

Now consider the same situation, but there are 50 students in the year in the same school. In this case, the absence of any one student doesn’t really affect the school’s average. The average score will still go up and down from year to year, but the change won’t be as large. In this instance, the unpredictable events happening to individual students don’t really affect the measure we are looking at, and so we are better able to assess how all of the students as a group are doing. When we have larger numbers of students, the differences between individual students become less important (the ‘outliers’ tend to cancel each other out), and it’s easier to tell how the whole group is doing. This is why the data reports you might come across tend to emphasise the number of students making up a measure (or the measure’s sample size).

In schools with small sample sizes, it’s dangerous to place too much emphasis on any particular year. However, we might still be able to learn something by looking at the trend over time. If the result in any particular year is being caused by unpredictable events, these will tend to go away the next year. If we see a consistent pattern across a longer period of time, it is more likely to be indicative of something real that is going on.

Measures like test scores are imprecise estimates of the learning we are trying to measure. Statisticians have a way of quantifying exactly how imprecise any particular measure is: the confidence interval. Confidence intervals are usually represented visually by a set of error bars above and below a particular value. 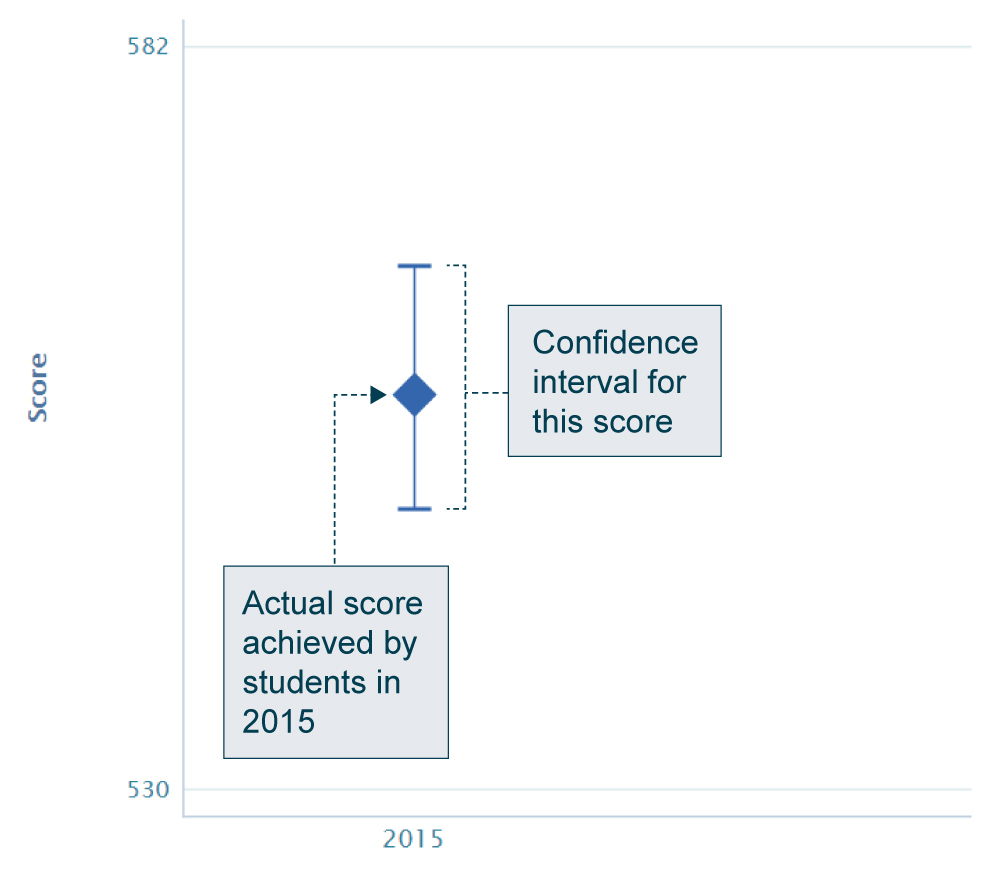 If the same students were to sit a test like NAPLAN or the HSC on many different days, they might get a slightly different result each time (due to unpredictable factors like how they are feeling on any particular day). This might result in different average scores for a school on each of the 100 different days. The confidence interval is a range of scores that we are 95 per cent confident contains the true value for the school. The true value will lie outside the range only 5 per cent of the time – on 5 of the 100 days.

When the confidence interval is very narrow, it means that we are very sure about the estimated number, and it is unlikely to be affected much by unpredictable events. This usually happens when there are a lot of students and the students are very similar to one another. When the confidence interval is very wide, it means that we aren’t at all sure about our estimate – the true value could be very far away from what this data is telling us. This is most often the case in very small schools.

Confidence intervals are useful because they tell us whether any observed differences in values (between results from one year and the next, or results from one school to a group of similar schools) are likely to be due to normal variation, or whether something more meaningful is going on. As rules of thumb: 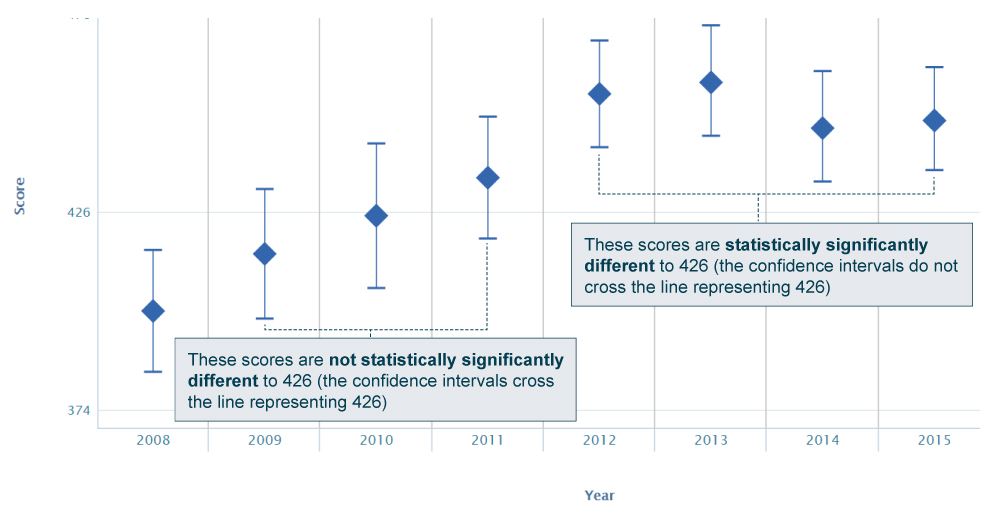 These statements mean that we are quite sure the two values or groups are actually different from one another in a tangible way, and the observed differences are not simply due to scores varying in regular fashion from year to year.

It can be difficult to make value judgements about quantitative student performance data without additional pieces of information. For example, if students scored an average of 80 on a particular maths assessment, how do we know if this is a good or a bad thing? One easy way to analyse your students’ data is to compare it to some sort of benchmark. In doing this, successes and opportunities for future growth can become clearer. Depending on your data, you might be able to make three types of common comparisons:

Each of these comparisons have strengths and limitations. However, they are not mutually exclusive – you can strengthen your ability to extract meaning from your data by using several of these comparisons at the same time. The best types of data will allow you to track your school’s student performance over time, relative to the performance of similar students, as well as an unchanging external benchmark or target.

A large body of research has established that particular characteristics of students and schools are associated with different outcomes:

This means that it is very difficult for some schools to assess their effectiveness. If a school has lower scores than other schools, does this mean that it has a lot of room for improvement, or simply that the students in the school face more educational disadvantage than in the typical school? There are two main approaches to getting at this issue.

The first approach is to compare the results of the school to a group of statistically similar schools. This comparison is included in My School, SMART, and the Scout reports. In all three examples, schools are ranked according to their ICSEA value, and the school is compared to the average of the schools with similar ICSEA rankings. For example, in SEF reports and SMART, your school is compared to the 20 schools with ICSEAs just below and 20 schools with ICSEAs just above your school. Note that this group is just statistically similar – it may be very different in all sorts of ways that aren’t captured by the ICSEA value (for example, in terms of its size, location, or cultural background of students). Your SEF data reports contain a Contextual Information report, which compares exactly how similar your school is to its similar school group using a range of indicators.

The second approach is a new type of measure called a value-added measure. This is a statistical method that attempts to adjust for external factors outside of the control of schools, in order to isolate the individual impact on learning an individual school is having. For example, suppose that girls tended to outscore boys by 20 points, but otherwise all other differences in results were due to different approaches schools have taken. In this scenario, it would be unfair to directly compare scores for a boys-only school to a girls-only school – the girls school scores might look better simply because it enrols different students, not because it is doing anything differently. We could make the comparison more fair by adding 20 points on to the boys school, or taking 20 points away from the girls school.

Value-added scores are a more sophisticated form of this simple adjustment, which adjust for many different factors outside of the control of schools, all at once. They also adjust for the previous scores of each student, and so become a measure of growth between two points (for example, between Year 3 and Year 5). A value-added score represents the growth between the two relevant years that we would expect if the average NSW government school student was in your school. The actual growth of the average student is shown as a horizontal line on the graphs in your report (for VA3-5, the average growth is about 85 NAPLAN points). If your school is above this line, then your school is estimated to be adding more to scores than the average school. 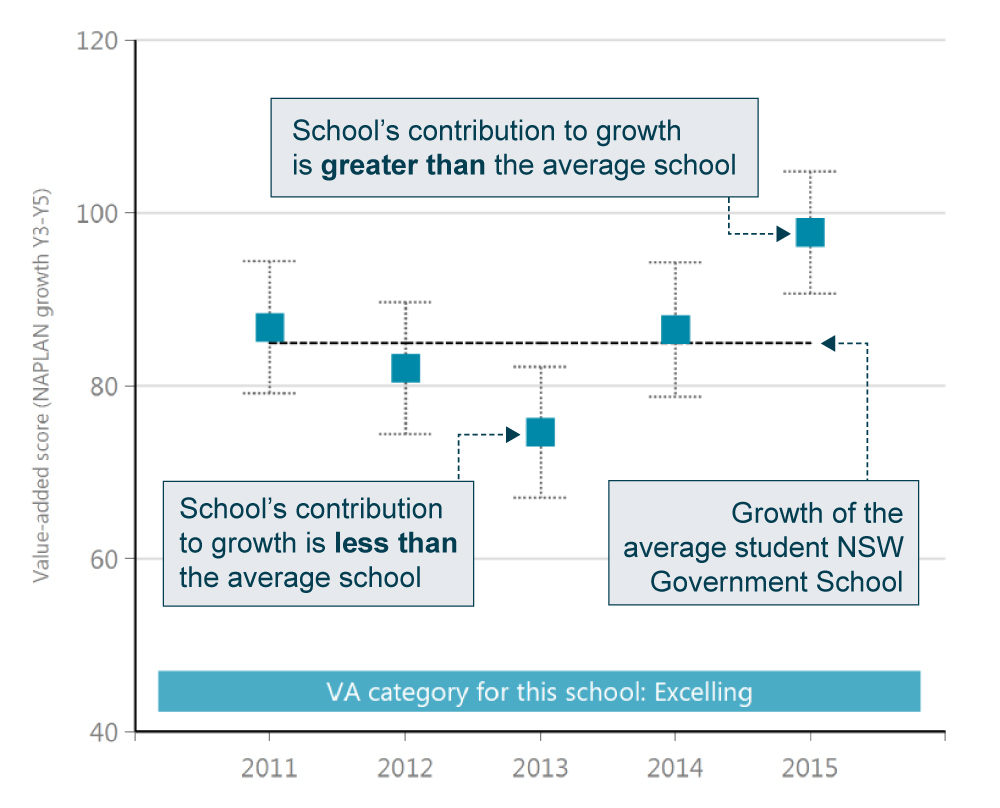 The current value-added models take the following factors into account:

For more information about value-added measures, how they are calculated in NSW government schools, and how to interpret them, see the CESE value-added Learning Curve.