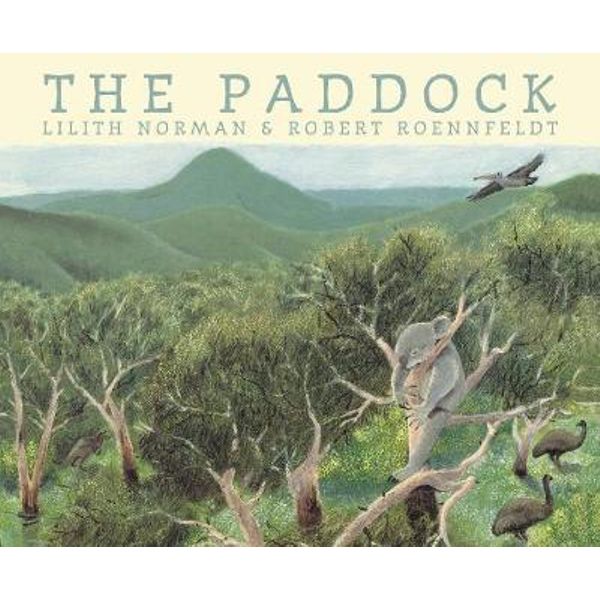 ‘The Paddock’ by Lilith Norman and Robert Roennfeldt is an optimistic environmental picture book. Its lyrical text and atmospheric landscape paintings describe the life cycle of a piece of land called the paddock. It is uniquely Australian and follows its history from its beginnings as a lava field through to the arrival of the Aboriginal Peoples and then white settlers.

Each double page spread describes the paddock’s transformation over time as flora, fauna and humans inhabit and adapt to it to suit their needs. The illustrations move from dreamlike awe through the primitive innocence of nature to the metallic shine and hard edge of civilisation. Like ‘Window’ by Jeannie Baker, its environmental message is that there is always a cost to development.

However, ‘The Paddock’ goes further in beautifully illustrating the reassuring ability of the earth to survive, to renew and repair itself, in whatever form the future may bring. Even if the soil should become sour and dead, the paddock will wait, as it has always waited, to live.

Being a quality picture book, ‘The Paddock’ is an ideal text to include in a conceptual learning framework using the macro concept of change over time. In her Lady Cutler address in 1994, Lilith Norman spoke about why she thought ‘The Paddock’ was such an important book to write.

‘I think very few (picture books) spoke straight to the heart. Very few had any subtlety. Very few were "onion" books with layer after layer to be peeled off and be discovered on each reading.’

Critical engagement with the text raises an awareness of the abilities of the author and illustrator to create these layers of meaning, while conveying environmental messages with a subtlety that compels the reader to analyse and draw conclusions for their own context. ‘The Paddock’ invites students to investigate issues of environmental change and sustainability to support their understanding of the geography focus on factors that shape places.

Suggestions for using this text

Connections can be made to other texts that show a sequence of time, such as ‘My Place’ by Sally Morgan, and Jeannie Baker’s picture books, ‘Window’, ‘The Story of Rosy Dock’ and ‘Where the Forest Meets the Sea’. (View ten minute videos based on the last two mentioned titles by visiting Jeannie Baker’s website.) Is there a common message running throughout all the books?

How do people repurpose land to make it sustainable for the future?

After reading and viewing ‘The Paddock’, the students focus on the illustrations of how nature has reclaimed the land where the town once stood. They consider abandoned sites, find examples of such places and compare them.

Students move their thinking to how abandoned or disused land can be effectively repurposed for the community. Students discuss any areas in Sydney they know of that have been repurposed, for example, new green spaces, parks, recreational facilities.

Students undertake a guided inquiry of how the current Homebush Olympic precinct was repurposed for the Sydney 2000 Olympic games. Google maps and SIX maps (with teacher guidance) are useful tools for this activity.

Using this as a springboard, students undertake an independent inquiry into how the site was once again repurposed after the 2000 games to make the land sustainable for the future. Visiting the site would be most beneficial so that fieldwork could be undertaken. If a site visit isn’t practical, visit the Sydney Olympic Park Authority website.

Students may extend their learning further by investigating how, in an attempt to repurpose the area, apartment blocks have been poorly built, resulting in whole apartment blocks being evacuated before Christmas 2018. The students explore the why and how of this issue, including an investigation of which different levels of government are involved and are responsible.

Relating this back to their own school, are there any areas of disused land that could be repurposed? The students make an action plan and proposal, presenting their findings to the principal for consideration.

Using their knowledge of ‘The Paddock’, the students investigate an abandoned development or ghost town in NSW or Australia. Examples could be the Newtown tram depot in Newtown Sydney, abandoned since 1957 and/or Yerranderie in The Blue Mountains NSW, which is an abandoned silver and lead mining town. They would investigate how they could repurpose the site for a sustainable future. Who would be stakeholders in this repurposing?

This inquiry-based project has relevance to the cross-curriculum priority sustainability. Students focus on protecting and repurposing environments while considering environmental challenges and the need for informed action.

Geography K–10 Syllabus © NSW Education Standards Authority (NESA) for and on behalf of the Crown in right of the State of New South Wales, 2015.

History K–10 Syllabus © NSW Education Standards Authority (NESA) for and on behalf of the Crown in right of the State of New South Wales, 2012.