‘Make a difference (MaD)’ shines a spotlight on the diverse and innovative ways teacher librarians respond to the teaching and learning needs of staff and students.

In this MaD compilation, teacher librarians share insights into their professional practice, learning spaces and library initiatives and how this can make a difference to student learning and engagement;

‘Miss, did someone really die?!’ was the question asked the day the body of the English Head Teacher was discovered in the library. A crime scene was soon established.

Collaboration with teachers and student engagement are at the heart of teacher librarianship. Since its inception in 2017, ‘Murder in the Library’ has provided opportunities for both. In the first year, the program used a study of the crime genre in Year 10 English as the anchor. I capitalised on my dual role as teacher librarian and English teacher and found an enthusiastic partner in crime in fellow English teacher, Gerry Brennan.

Two English classes worked together in the library for several lessons, interrogating the evidence in their files, questioning witnesses and orally presenting their theories, supported by evidence, on the identity and motive of the murderer. At the end of their presentations, the hapless murderer (me) was dragged away, loudly protesting and claiming innocence, by a very intimidating deputy principal.

Students enthusiastically devised some very interesting – and sometimes salacious –theories. Eagle-eyed students questioned why the teacher librarian was wearing a bandage across her wrist in the days after the murder and linked this to the coroner’s report which confirmed that skin samples had been found under the victim’s fingernails. Participants were engaged throughout the investigative process and thoroughly enjoyed it. Library visitors were similarly intrigued by the crime scene. Staff leveraged the opportunity to display both fiction and nonfiction crime books.

In 2018, we were joined by science teacher Magali Mello who introduced a forensic element to the program. This opportunity to introduce a cross curriculum component was exciting. Together with colleague Coni Halder, Gerry, Magali and I developed a new and more complicated storyline revolving around corruption. The most challenging aspect was working out which pieces of evidence would be best to use. We wanted to incorporate some red herrings yet ensure the plot was discoverable – but not obvious. Including forensic evidence, such as blood spatter on the ceiling, casts of the weapon, footprints and handwriting samples, made the experience immersive and so much richer. 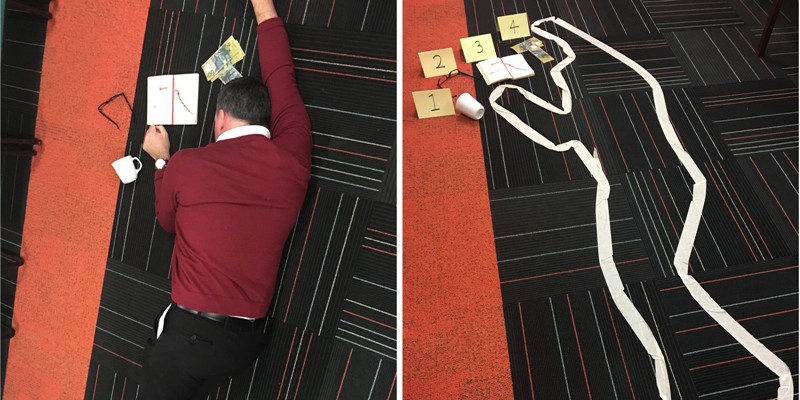 In its second year, the program was more flexible as classes were able to visit whenever they pleased to examine the evidence in a specially designated forensics lab. As well as hardcopy files, digital material (all the paper evidence plus CCTV footage) was made available via our learning management system. 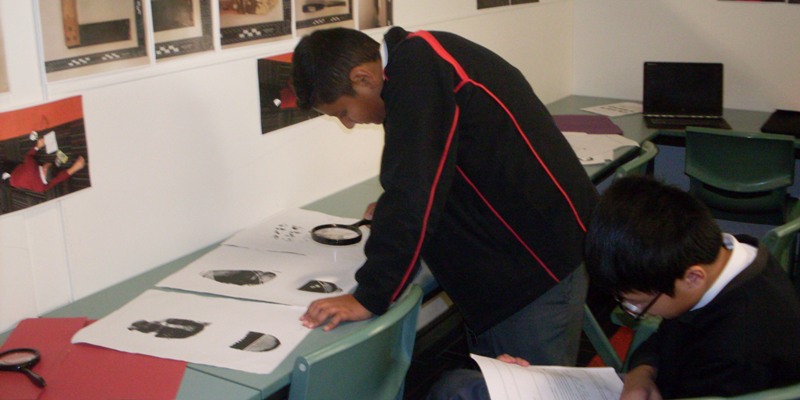 Due to its popularity, the program was extended. Altogether, 3 English classes and 7 science classes participated, with requests to run the program again in Term 4 for science and legal studies. The plot was recalibrated using the existing evidence.

With large numbers of students participating, it was not feasible to arrange interviews of witnesses or suspects, although one of the key suspects was treated to a surprise interrogation when he wandered into the library. We created student support materials including a glossary of medical terms, an outline of the task, a student report template and an analysis of evidence template. The reveal came by video. We recorded an interview between the murderer and our police liaison officer, and released it at the end of the program.

Feedback from teachers about student engagement has been overwhelmingly positive. One teacher has shown me the depth and detail of work from some students that usually do little, including a portfolio with detailed annotations of the evidence.

This year, we plan to integrate a specific text into the program. It will be linked not only to a study of forensics in science and the crime genre in English, but also to an examination of text and context. There are many other possible opportunities to expand further, incorporating other key learning areas, such as HSIE and TAS. Fortunately there are plenty of volunteers ‘dying’ to be involved!

During the first half of 2018, I researched the concept of ‘genrefying’ our nonfiction section. With a student population of less than 600, borrowing statistics for this collection were pretty dismal.

I was particularly indebted to Jennifer LaGarde’s article, Genrefying your collection without changing call numbers and the accompanying step-by-step guide, circulated by a colleague on the NSWTL listserv – thank you! When I looked at the checklist, we had already completed some of the steps; we were on the right track.

In the September school holidays, the library was recarpeted through an exciting floor-covering apprenticeship scheme. Fresh, brightly coloured carpet tiles were installed, echoing the existing colours in three zones which delineate function and purpose. Moving all the furniture in the library was the impetus for weeding nonfiction to an age of 5 years. (We decided that Kevin Hennah’s recommendation of 2 years – from his VISION 2020 seminar – was a little brutal for our budget.) Weeding proved crucial in reducing the scale of our project. 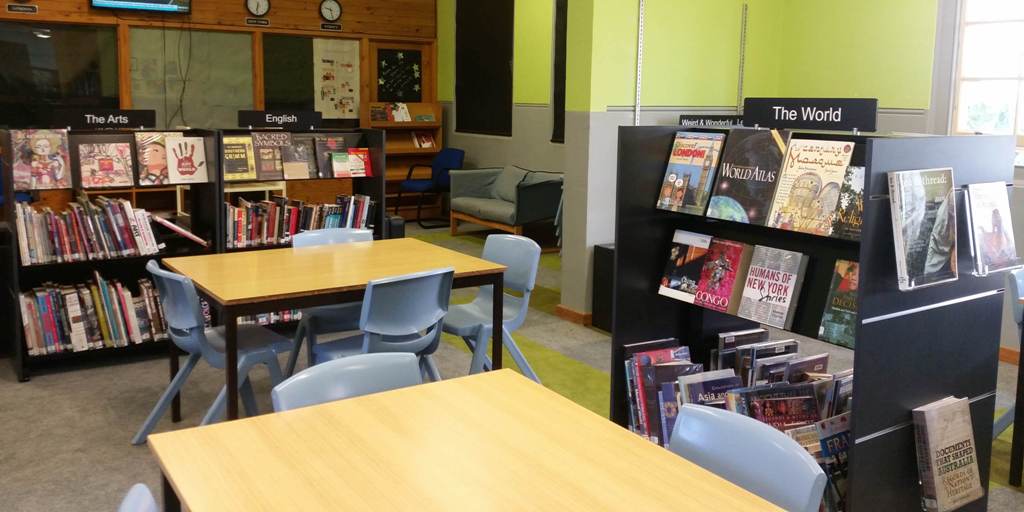 We then calculated how many shelves we needed and put our case for funding to the principal (using evidence of increased resource usage from Hennah’s seminar). New black units were ordered (to make the colours pop) with face-out display. Three of the units are double-sided and on castors, so we can move them around to use the space flexibly.

Genres was selected, based on the curriculum and our students’ interests. For example, with our huge focus on wellbeing, we created a genre (and therefore a shelf) called ‘Health and wellbeing’. Some of the new genres are similar to Dewey classification anyway, and within each new genre books continue to be organised in Dewey order. In future, as the budget allows, we will buy more signs to indicate sub-topics (for instance, ‘Bullying’ within ‘Health and wellbeing’). 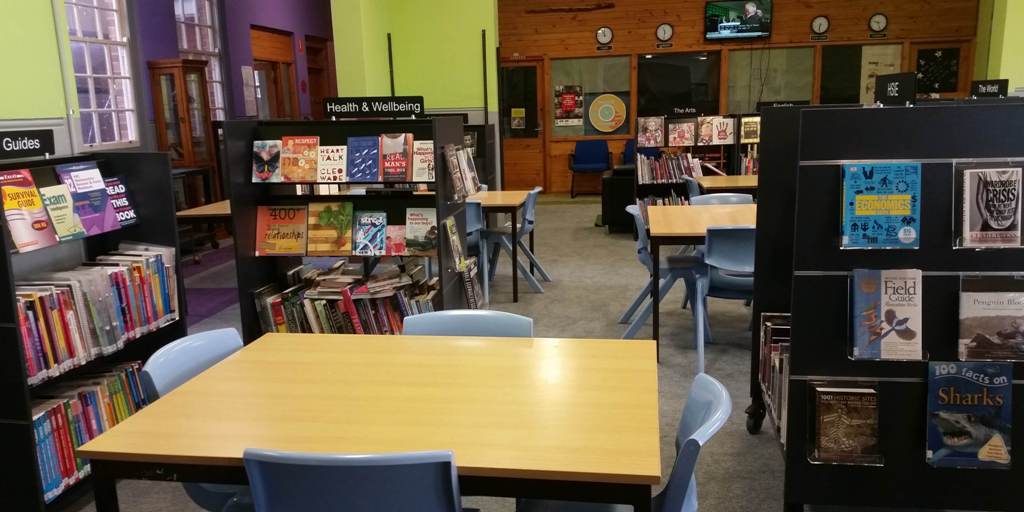 The ‘Health and wellbeing’ section

In summary, the process involved:

As a result of the change, the ‘Green zone’ – where the nonfiction lives – is now a dedicated senior study area. The rearranged shelving has created small spaces for groups to study more effectively. (A shift which also accords with students’ study preferences, expressed in a survey I sent to students, teachers and parents.)

Students and teachers love the more accessible, appealing format. A quick comparison of borrowing numbers from Terms 3 and 4 reveal that borrowing of nonfiction books more than doubled after division into genres. Beyond this, the state of the shelves each day reveals that books are also being picked up and used within the library. The face-out display means that resources are more readily viewed and accessed. For example, a dictionary never touched on the Reference shelf was plucked from the new English shelf. Similarly, students who don’t routinely enjoy reading have been tempted by the presented nonfiction options, with topics and formats more appealing to them than fiction. With the help of our English colleagues, students are encouraged to borrow from both areas. Teachers too have expressed increased interest and amazement of some of the great resources we have.

Overall, the change was physically demanding but not brain surgery. We progressed systematically and the new, user-friendly layout brings a great sense of achievement!

Our teacher librarian network – the Penrith, Mt Druitt, Blacktown and Windsor (PMBW) Teacher Librarian Professional Learning Group – has been running conferences and afternoon meetings for decades, inviting colleagues to share ideas and skills and support one another. I’ve been a member of the committee for 26 years – and the group was already well-established when I joined! Since then, I’ve assisted with running conferences, served as a chairperson and treasurer, and presented at some conferences, including one in late 2017. From that presentation came a connection with the first of four teacher librarians I’ve mentored over the last year. We obtained permission from our principals to visit each other’s schools, and we liaise via phone and email.

An informal lunch time discussion at the PMBW Teacher Librarian Conference in Term 2 opened the door to similar mentoring experiences with two other teacher librarians. As we chatted, these teachers expressed uncertainty about how to carry out certain library tasks and teaching activities. Following this conversation, both remained in touch to continue sharing ideas and knowledge about various aspects of library administration and teaching and learning. Again, I’ve visited their schools and return visits are planned in the future, including to observe each other’s teaching practice. 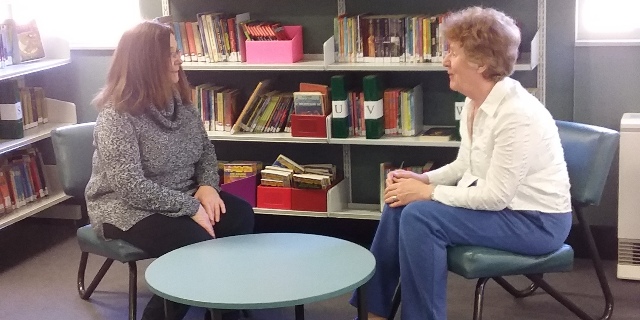 A mentoring session with Jan

Inevitably, some connections form online too, including via the Library Matters Yammer group (accessible by teachers employed by the NSW Department of Education only). For instance, I saw a request by a teacher librarian seeking examples of colleagues’ programming and library lessons for different grades. While our schools are in quite different parts of the state, precluding a visit, we exchanged email addresses so I could send through some resources, and the online community responded with a range of supportive ideas.

Last year, our school underwent external validation. As part of this process, all staff were invited to submit evidence of how we were meeting our school goals. I submitted a few things regarding teaching and learning in the library and student achievement, just in case this helped to build the school portfolio.

As a spin-off from this, I was unexpectedly approached by the executive regarding my mentoring efforts; this work was of value in our school report! I was asked to write about it and to provide photographs.

Isn’t it fantastic to think that the ordinary work many of us do in upskilling and supporting each other is regarded as such an important part of the evidence that our schools are fulfilling their role as leading educational institutions in our communities!