Martin Gray shares the results of a survey he conducted on genrefication of the fiction collection.

Is genrefication for you?

One of the common debates taking place between Australian school library staff is the discussion around moving a school’s fiction collection to genre order, rather than the traditional order of using the author’s last name. Bookshops have been using the genre system for years. It is familiar to book buyers and, presumably, a for-profit industry would not use a method unless they thought it was beneficial.

The growing popularity of the genre method in schools is clear from the number of articles and presentations on the topic. As the School Catalogue and Information Service (SCIS) recently added genre retroactively to all its records, schools using SCIS records should be able to add genre to all their resources easily. SCIS also publishes articles on how and why to move to genre order in their quarterly publication, Connections.

In my own town, the public library switched to genre order several years ago and reported a lift in fiction borrowing of around 20%. Several of the local primary teacher librarians were also interested in moving, but all of us wanted more information to answer the following questions.

While there were a few individual examples of schools that had moved to genre in literature, there were no overall figures easily available. To this end, I decided to ask the library community.

I created a survey using Google forms and requested responses through the NSWTL list serve, the NSW Department of Education Yammer forums, the OZTL list serve and through some direct emails to school library staff. The questions covered some logistical information such as, which sector and which state the library was in, does your school use genre organisation, why and why not. If yes, for how long and how many genres. It then moved to ease of use and borrowing statistics and allowed for final comments, for or against. After a month, and 100 responses, the survey was closed and the results analysed. 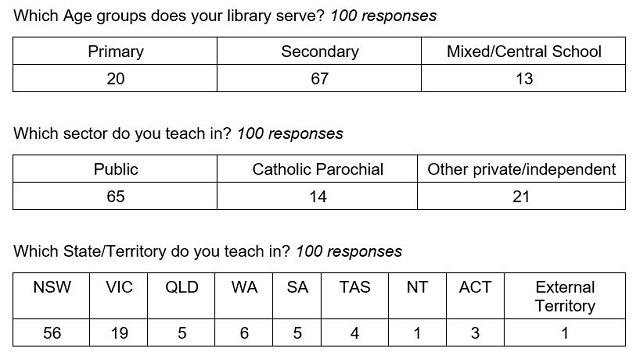 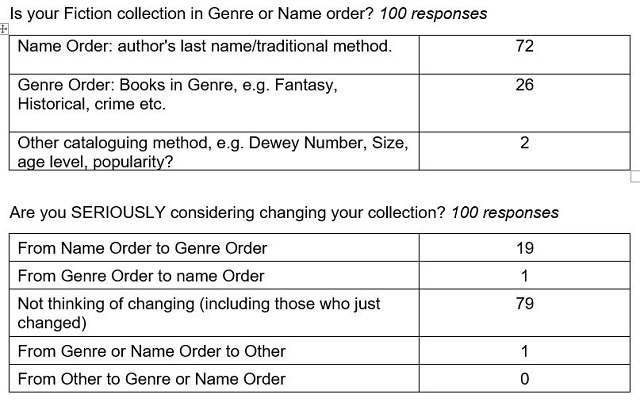 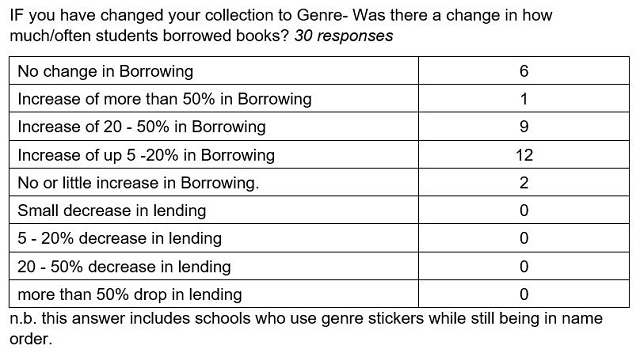 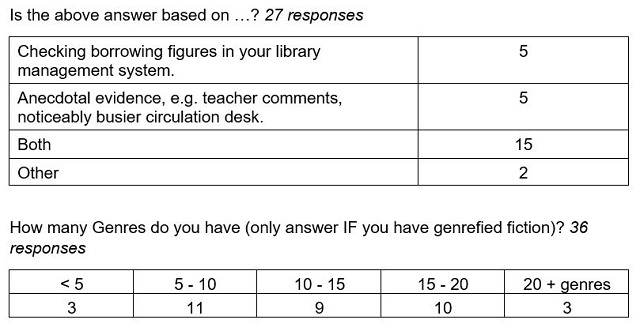 Genre order was more common in high schools and in private schools, than in public or primary schools. There seems to be no great difference between states, although all the Victorian Catholic schools were in Genre order.

The majority of libraries who were using genre reported that shelving or cataloguing was either the same or easier than name order, with 3/35 respondents saying it was more difficult.

A quick view of these figures alone, from our small sample, suggests that libraries would see an increase in borrowing with little additional ongoing extra requirements in terms of stocktake and shelving.

However, there are other factors, which need consideration. As the majority of the libraries using genre order have only been using the system for less than three years, it is difficult to determine if these borrowing increases will be sustained. This would require a study of the libraries who have been using the genre order for several years, of which this study found only six.

If we look at the responses to the long answer questions though, we find some harder questions to answer. Upon reflection of the online discussions around genrefication, there were many pros and cons brought up regarding changes.

Many in the pro camp quoted two main themes: ‘It is what the students want’ and ‘Borrowing goes up’. Indeed, many students ask for books by a type rather than by an author, so this makes locating a book easier. Also, some literature suggests that many students find traditional library classifications difficult to navigate, which leads to negative associations with libraries, and that genrefication is a way to combat this (Potter, 2016). Some teacher librarians reported asking their students beforehand if they would prefer to change.

Many students and teachers commented that they preferred the new genrefied system. There were even comments pointing out that, for a reading lesson, books are easier to find, so students settle into the lesson more quickly, which leads to better lesson outcomes.

Those against genre order focused on information skills, the difficulty of defining genre, the possibility of reducing a student’s reading range and the lack of research showing the educational benefits over time.

Many teacher librarians believe that genre order collections may lead to a decrease in information seeking skills and, as schools are trying to improve these skills, the status quo is more educationally beneficial. I presume this refers to the use of the enquiry terminal and genre searches as training to develop skills needed in the future to effectively search databases or university library collections to find information, However, students wishing to find books by the same author in different genres would still need effective search skills to locate resources in their school library’s collection.

Some teacher librarians commented that genre classification would lead to a reduced reading range, with students staying only within the genre they were comfortable reading. One said the change would be difficult for the ESL students. Some in primary libraries said there was no need to move to genre as books were in boxes in groups, often within the name order arrangement.

A common argument was that books do not neatly fit into genres. Some books cover multiple genres, raising questions such as:

Also, the popularity of a genre may change overtime. For example, one teacher librarian no longer uses the vampire genre, since the Twilight books era ended, and moved that collection back into the supernatural genre. An author’s last name stays the same, but changing genres is a big job.

The lack of educational evidence for a benefit in changing to a genrefied fiction collection was a strong deterrent for data driven teacher librarians. There are few studies, if any, which provide definite numbers on increased lending, on how many schools have changed, and if it is more difficult to manage in terms of cataloguing and shelving. In short, there is little evidence beyond the anecdotal to say changing is worth all the time and energy.

There were also some neutral, pragmatic arguments. For instance, many teacher librarians do not have the time to rearrange a library. One school, Radford Library, took 10 days to make the switch, closing the library fiction area for this period (Davenport, 2017). For many schools this may not be an option. Other schools spoke of genre taking up more space. In NSW public schools, many teacher librarians, who have just changed from the OASIS to the Oliver management system, are more concerned with learning the new software, rather than any major change to the operation of the library shelves.

In her article for SCIS Connections, Susan Davenport (2017) raised questions that a teacher librarian needs to ask about how students choose books, before thinking about moving to genrefication, and she believed genre was the answer.

From this survey’s results, including the comments made in the long answer sections, I believe more questions arise. If a library has the resources to move to genre order, and we assume that borrowing increases:

My town library is happy using genrefication because borrowing figures increased. That was a KPI they were working towards. However, a school library has more goals, relating to improved literacy and information seeking skills. If information seeking skills are affected, or reading range reduced, is that offset by the increases in borrowing and, we presume, in reading? What is the value of the weighting towards reading over information skills? How can we even determine if skills or range drop?

These questions, apart from being hard to quantify, would have different answers for different schools. A school, which already has a high library use and reading rates, may prefer to focus on encouraging more information seeking skills. A school in a low socio-economic area may be more interested in just getting the students reading.

There is also a question of how many genres a library should use. The SCIS subject headings (Education Services Australia, 2017) lists more than 30 genres. For many teacher librarians this is far too many. The Educational Services Australia Metadata Services manager recommends finding out what genres your clients/students expect and comparing this with what matches to the SCIS records (Kneebone, 2016). Personally, I would look at placing Science Fiction, Fantasy and Steampunk Fiction all under the one heading. However, this would require signage explaining that this is what to look for on the shelves if the students searched for one of these genres on Oliver. Some libraries used the available spine stickers to choose their number of genres, while others used the SCIS headings. Yet again, there is no clear answer for what is best.

While moving to a genre collection was seen as having some downsides, including being a large job, some suggested alternatives could avoid the massive expenditure of resources while still providing many of genre order’s benefits. The most commonly suggested methods, both in the survey and in the literature, involve using genre stickers on the books while still having them in name order (Dunne, 2015). While this requires buying stickers, choosing how many genres to use, putting the stickers on and explaining what the stickers mean, this is still considerably less work than rearranging the entire collection. It allows students to find genre without sacrificing reading range and can be used as a test to see if changing to genre is indeed worth the extra effort.

Other suggestions involved having break out displays of a certain genre on spinners on the library floor. Why not use both these methods? Use genre stickers and occasional highlighting of a certain genre in a display to encourage wider reading.

While only a quarter of the schools who replied have moved to genre order, almost all reported that there was an increase in library use and little extra work after the initial move. From this small sample and these criteria, using genre organisation would appear to be a great success. If, however, we factor in the yet unaddressed concerns over information skills development and reading range, and then look at questions about the number of genres and the initial outlay of labour in making the move, this assumption becomes less obvious. Until a clearer answer can be given, the mixed approach may be the most sensible option. Most importantly, the individual situations of each school and the needs of the clientele must be considered before any decision is made.

Potter, J. (2016). ‘The effects of genrefication of fiction on the book selection process in elementary schools’. Culminating projects in information media. Retrieved 23 October 2019.