This digital publication presents 48 outstanding books, from 'Tangara' (1962) to 'The Bone Sparrow' and 'Teacup' (2018). Annotations that succinctly place each book in its context, and biographical information about the writers and illustrators, add to the value of this unique resource. The publication is unique, in that while there are many booklists serving varied purposes, this list has a specific tale to tell: the story of IBBY Australia's selection of these books, every two years forwarded to IBBY headquarters in Switzerland, to become part of a collection of books 'characteristic of their country and suitable to recommend for publication in different languages'. 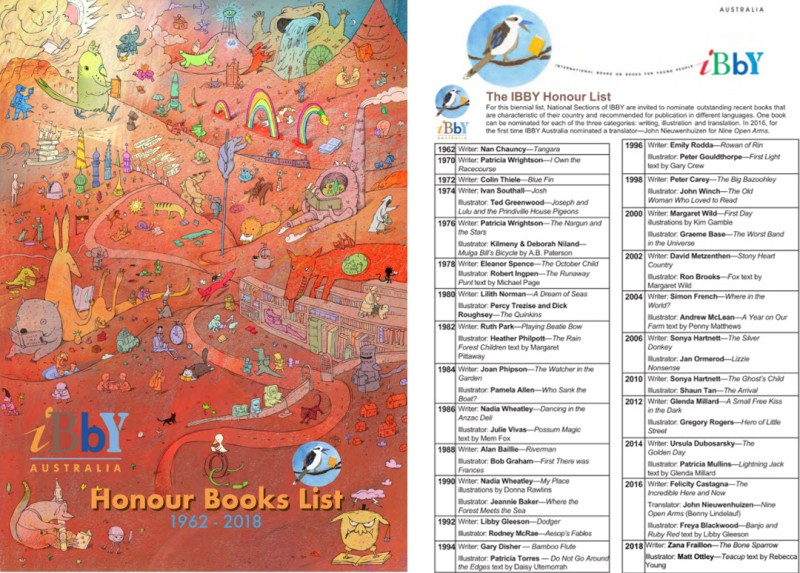 In October 2018, IBBY Australia Inc and the National Centre for Australian Children's Literature (NCACL) proudly announced the Sharing Stories exhibition which opened in the Woden branch of Libraries ACT. The exhibition included copies of each of the IBBY Australia Honour Books, even those most elusive titles that had taken some sleuthing to track down, sitting on the shelves and inviting browsers to pick them up, to smile in recognition of old favourites, and to explore those not encountered before. And alongside these Australian books was a collection, for the first time ever hosted in our country, of all the international IBBY Honour Books for 2018: 191 books from 61 countries, providing a snapshot of the best publications worldwide at this moment in time.

The collection of 48 Australian Honour Books provides not a snapshot, but something akin to a moving picture, as the viewer moves through time, meeting highlights in the development of Australian books for the young. The list begins with Nan Chauncy's 'Tangara', one of just 15 titles honoured by IBBY in 1956 (albeit entered by the publishing country, the UK). From one general category, the list changed to include in an 'Illustration' category in 1974, and a 'Translation' category in 1978. Ursula Dubosarsky, herself an Honour Book writer ('The Golden Day'), speaking at a preview of the exhibition in Canberra, pointed out that the Australian list is 'not only of literature but also of changing social circumstances, values and preoccupations over the 55 years'.

IBBY was founded in postwar Europe by the visionary Jella Lepman, who worked to build bridges to international understanding - and thus, peace - through children's books. IBBY claims that the publication of the biennial honour lists is one of the most effective ways of furthering these objectives. Ena Noel, first president of IBBY Australia, and many others here have contributed over decades to the work of IBBY, including faithful selection of these books. As I set about the task of writing these annotations, I was aware of the palpable presence of earlier selection panels, and was especially alert to traces of the judgment of Ena and of Maurice Saxby.

At a celebration of IBBY Australia's Golden Anniversary in 2016, Mark MacLeod said of the Australian Honour List that the strongest impression created by it is its support of excellence in writing and illustration:

While asking challenging questions about the diversity of the list, MacLeod noted the emphasis on the child as outsider and agent in books such as 'I Own the Racecourse!'; and on the power of changing the way we see in 'Banjo and Ruby Red', 'My Place', 'Playing Beatie Bow', 'Where the Forest Meets the Sea' and 'The Incredible Here and Now'.

Dubosarsky, in her preview speech, called the Australian Honour list 'remarkable in that just about every name on the list since 1962 continues to be held in high esteem. IBBY Australia should be extremely proud of having such a record of what appears to be most excellent and perspicacious judgment'.

The IBBY Australia Honour Books list tells a unique tale, but it is not a finished one. The two-yearly process of selection and annotation will continue, and Australian children's books will develop in directions we cannot predict. I hope IBBY's selection panels will continue, with 'excellent and perspicacious judgment', to add to this 'gold-lettered rollcall'.

It is a pleasure to see this publication reach fruition, so that it can be an accessible tool for professionals such as teacher librarians, for parents and children, and for anyone who wants to learn more about Australian children's literature for academic or recreational purposes.

Special thanks to Dr Belle Alderman, Justine Power and the NCACL for enabling this publication as part of the 'Sharing Stories' project; to IBBY Australia committee members for their contributions; and, of course, to the writers, illustrators and translator whose works appear on this important list.