At The Junction Public School, our students love to use iPads as a tool to support their learning. When the first iPads were purchased and introduced 18 months ago, it was a learning experience for both staff and students on how they could be seamlessly integrated into our teaching and learning programs. However, we soon found that the students were already familiar with the technology and intuitively explored apps without needing to be given direct step-by-step instructions. In a short period of time, our students realised that one app usually did not allow them to produce a product with all the features they desired and they began experimenting with a variety of apps to create their final product. This process has been coined App smashing by Greg Kulowiec. He defines app smashing as:

… the process of using multiple apps in conjunction with one another to complete a final task or project.

App smashing allows students to engage in more complex cognitive structures as they seek to analyse and evaluate apps and their ability to assist them in creating a product that satisfies the task criteria. As students become familiar with a wider variety of apps, they will draw on their knowledge of previous projects to determine if a particular app will satisfy their needs for each new project. When asked about the benefits of using mobile technologies in the classroom, Violet from 5/6C responded:

The apps on iPads are awesome, and it is incredible for mankind to think of something as interactive as this. Using iPads bring[s] me closer to modern technology. I love how we can use them to do class work, because we can experience different types of learning.

Not surprisingly, Objective A, communicate through speaking, listening, reading, writing,viewing and representing, provides many valuable opportunities for teachers to expose their students to digital and multimodal texts. However, Objectives C and D provide students with limitless opportunities to express themselves creatively, imaginatively, interpretively and critically while communicating via different modes.

Technology, in the form of iPads, is one avenue that allows our school to provide students with engaging, creative multimodal projects. These challenge them to carefully consider their audience and purpose when creating a product and integrating a variety of skills while carrying out the task.

Task: Text innovation - Create a four panel narrative comic strip based around the Superfinger superhero character from The 13-storey Treehouse by Andy Griffiths. The four panels must demonstrate a distinct introduction, problem, solution and resolution.

This was one of our first major app smashing projects. The task was introduced to students and, as a class, we brainstormed how we might create our Superfinger comics. Initial suggestions included drawing our superhero and then photographing it, or drawing it in a drawing app and saving it to the photo roll. As students had previously used the app Superimpose to create hybrid animals, they were familiar with overlaying their drawing onto a background and removing unnecessary sections, so there was only a brief discussion on this part.

In pairs, the students begin their comics. While observing their creations, I noticed one group had taken a photo of their finger and imported it into the drawing app. I immediately had them use AirPlay to share their superhero character with the class, via our TV. The rest of the class thought it was very creative and, as a result, they all made their characters using this method. The final comics were fantastic and the students were especially thrilled to see Andy Griffiths’ and Terry Denton’s comments on our class blog. 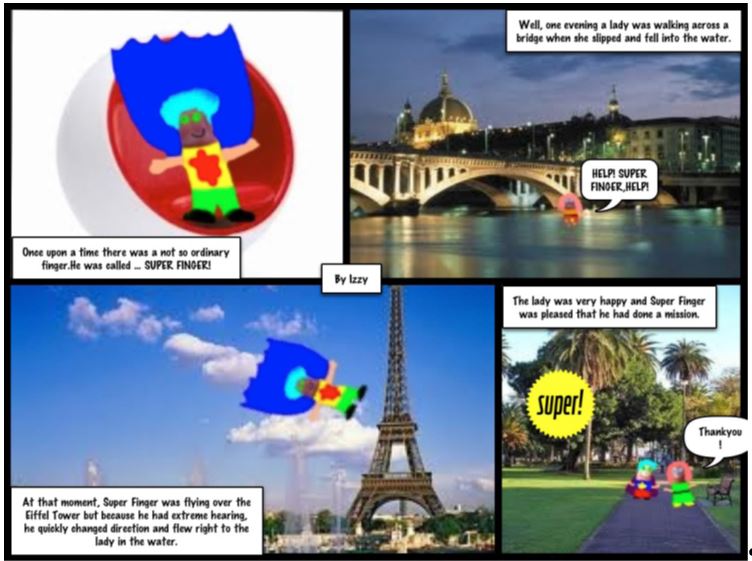 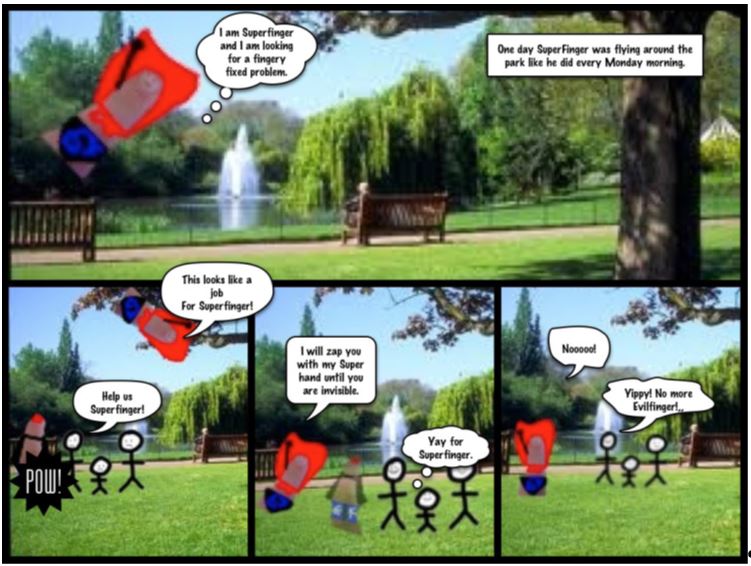 Task: Ever wanted to go to Mars? Well now you can! The Mars One program is looking for the best candidates for the first human mission to Mars in 2023. Create a one minute oral presentation to convince recruiters that you are the best person for the program.

Tellagami is an app that enables students to create an avatar and record their own voice to accompany it. This app is great for students to create their own news broadcast, weather reports, information reports, or book reviews or summaries, as it allows students to customise the background to suit their topic. The following project was completed by one group during literacy rotation time. They were targeted as needing more practice elaborating arguments.

NOTE: Viewing of student projects in the classroom, is initially achieved using AirServer /, a program which, when installed on your PC, allows you to airplay your iPad screen to the computer for displaying on the SMART Board. Student and teacher feedback is given using this mode of sharing. Completed projects are uploaded onto YouTube to allow students to share their creations with their friends and family at home via our class blog.

Task: Create a weekly news broadcast to highlight important upcoming events and celebrate the successes of The Junction Public School. The news broadcast will be shown each week at the Primary assembly and uploaded onto the school website.

5/6C students thoroughly enjoyed learning how to create a weekly news broadcast after initially being inspired by the efforts of S2/3M students at Cardiff North Public School The airing of the broadcast at assembly each week is always met by cheers and thunderous applause. Students in other classes have also expressed interest in filming segments and the project continues to grow. When asked about how she feels about being involved in our news broadcast each week, Hannah replied:

Creating The Junction News is an amazingly fun activity to do. I enjoy collaborating with my classmates to put together the news every week. It’s a fun way to express what we do in our school. Together, we learn how to write good scripts, use iMovie and most importantly how to cooperate and listen to each other’s ideas.

See the student Weather reports for the final products.

The process of app smashingis now fairly commonplace in our classroom. As students set out to create a comic, puppet play, movie or artwork, they plan how they will go about it and brainstorm apps that will help them achieve their final product. The focus has moved away from me, as the teacher instructing them on what apps to use, to them making the decisions themselves after considering the pros and cons of what each app has to offer. I am always excited to see what they will come up with next! To keep up to date with our latest app smashingproject, be sure to drop by our class blog, 5/6C @ The Junction.

Visit Laura’s ICT with Miss Cwebsite for more ideas on integrating technology in the classroom.