Where the rich texts are: Sendak’s influence

A third generation of children are reading ‘Where the Wild Things are’. As a text it is timeless, always timely and incredibly poignant. Is this a story about taming your inner beast? Or is it an autobiographical wish from a man who did not have the courage of Max, (Sendak, M, 2004)  but was expected to be a decent child … to shut up and be a quiet kid (NPR,2011).

This is the advice given by Maurice Sendak, in the final months of his life, to radio host Terry Gross during a rambling interview titled, ‘Maurice Sendak: on life, death and children’s lit’(NPR, 2011). Obsessed with death in life, then infatuated with life, when faced with dying, Maurice Sendak has left a legacy for the ages.

Sendak is a pioneer in the world of children’s literature, though he famously claims that he does not to write for children, but that he just writes (Colbert, 2012)

‘Where the Wild Things are’ was a ground-breaking text when first published in 1963. Many librarians initially refused to put the book on their shelves. Teachers and parents thought the wild things would irreparably scare the children in their care. Critics hypothesised about Max’s direct questioning of authority and the lack of punishment he received upon his return. But like many great art forms, time eradicates the hypersensitivities of society and ‘Where the Wild Things are’ has become a mainstay of the children’s literature cannon.

For most readers ‘Where the Wild Things are’ is the text that springs to mind on the mention of the Sendak name. The images from ‘Where the Wild Things are’ have become iconic. They themselves represent the world of children’s literature. Yet many do not realise that Sendak illustrated over 100 books. The illustrations are quite varied in nature, but there are themes that seem to run through many of them. Personified animals and creatures are often used alongside humans. His characters frequently use flight as a vehicle, as in ‘Outside over There’ and also in his latest book ‘Bumble-Ardy’, which was originally created for Sesame Street.

Youtube: Outside Over There by Maurice Sendak Narrated by Tammy Grimes

Sendak’s illustrations in ‘Mr Rabbit and the Lovely Present’ by Charlotte Zolotow play with intertextual references to Alice in Wonderland and the white rabbit. The girl is familiar in a way that instantly makes the reader recall their impressions of Alice and, of course, she follows the white rabbit through the woods.

Other intertextual iconic characters include the bakers ‘In the night kitchen’. Although they are a great deal plumper, these baking triplets, with their short, black moustaches and eagerness to bake a boy in the oven, have a subtle connection with Hitler, and illustrate the childhood impact of Sendak’s Polish Jewish immigrant parents, who were burdened with feelings of guilt from avoiding the holocaust in a new country. This and other Sendak creations are so rich. When reading or viewing any of his texts, the reader cannot help but make links to cultural and literary references.

His work has also gone on to influence others. Sendak’s own images are used in popular culture as intertextual references. The Muppets character Sweetums , created in 1971, makes the viewer vividly recall the wild things from the famous text .

Another famous Muppets clip with Kermit the Frog laying in a hospital bed with a forest growing around him, is a wonderful example of how meaning can be added to a text, layer by layer.

A reading of ‘John Brown, Rose and the Midnight Cat’by Jenny Wagner and Ron Brooks  could refer the reader to similarities in the illustration styles of Sendak and Brooks. The thin, cross-hatched lines that create the texture, shape and shadow of John Brown and Rose, quickly identify with the reader as comparable to the images in ‘Where the Wild Things are’. Perhaps Brooks styled the book with such a similar technique as a tribute, or perhaps it was an unconscious and unidentified conduit.

Julia Donaldson and Axel Sheffler’s ‘The Gruffalo’ is often referred to as the Sendak for the early years. This may not give enough importance to either text, but it does bring to light the similarities between the texts. The gruffalo is comparable to the wild things in stature, and trimmings, and the text in the two books is remarkably similar.

Both the gruffalo and the wild things are remarkably shy, unwise and inherently in need of companionship. The reader feels emotions on behalf of the beasts, which goes to contradict the whole suggestion of monsters being dangerous.

The Rosenbach Museum in Philadelphia is the major repository for Maurice Sendak’s work. Their website contains videos of Sendak and a timeline of his major works, achievements and life events. Of particular interest is the short video of Sendak speaking about his childhood and his love of movies and storytelling and another earlier interview from 1985 in which Sendak talks about the early stages of his picture book career.

It seems he was always fascinated with the art of storytelling. As he was not a robust child, he had more time than most to think up stories and tell them to his friends. His unique way of watching and reflecting upon the world is how he came upon his inspiration for the wild things. The wild things are based upon the images he remembered from childhood of his relatives who had recently immigrated to the United States. They were in poor health with yellow teeth and wild hair. To a child they appeared frightening but, upon closer encounter, they were loving and warm. The same can be said of his ‘wild things’. At first glimpse they appear scary and fierce but, upon a closer inspection, their round and soft shapes and the angle of their glance make it obvious that Max really has nothing to fear.

Everyone has his or her own experience with ‘Where the Wild Things are’. Here are some teacher recollections.

I used ‘Where the Wild Things are’ as the stimulus for a drama activity with my Year 2 class. They set up freeze frames of images from the story then each character had a turn to come alive and talk about how they were feeling, what they were thinking and what they might do next. Their responses were so imaginative and really demonstrated their understanding of the story, which I think is because it’s such a rich text with so much scope for creativity.

Students at Cecil Hills High School are given ‘Where the Wild Things are’ as an example of a subversive picture book. Students are asked to focus on the relationship between the written narrative and the impact of the graphics. Ultimately students are asked to choose where they would rather be: in a world defined by words and structures and where good things are found to eat; or where the wild things are.

I teach boys and the text ‘Where the Wild Things are’ is one of my favourites because it doesn’t matter if I am teaching children in Kindergarten or in secondary school. The story engages everyone and I think this is because they can identify with Max and his vivid imagination. I always use this text when teaching young writers how to use familiar settings in their orientation because all children have a bedroom regardless of where they live or who they live with. There are no limitations!

I have used the illustrations from ‘Where the Wild Things are’ often, sometimes in combination with short excerpts of text as well, for creative writing inspiration with Year 9 classes. Sendak’s images were most successful in releasing the inner voices of boys, especially in these writing tasks, and sparking their creative spirits. I heartily agree with the idea that Maurice Sendak was able to touch the imagination of all children, especially in accessing the notion of taming the wild beasts within one’s mind. All classes that have used these images have produced most original and authentic pieces. Maurice Sendak’s characters have touch points for all readers, no matter what age.

As an artist and composer, Sendak did it all. He created an animation, Really Rosie based on his books, with music by Carol King.

He partnered with Tony Kushner to produce a children’s opera, Brundibar. He worked with Spike Jonze to bring Where the Wild Things are to film in 2009 and he wrote and illustrated a body of work greater than most artists could ever hope.

Maurice Sendak loved reading and listening to music. Herman Melville, along with Emily Dickinson, are writers that he adored. Mozart was a composer he admired.

Maurice Sendak created rich texts; narratives that generate much discussion and difference of opinion. Texts such as these are magnificent examples of how literature can engage students K-12, encouraging abounding conversations and self-expression

The following questions may be useful for students Stages 1 to 3, to explore visual texts, particularly for a study of Maurice Sendak’s picture books. 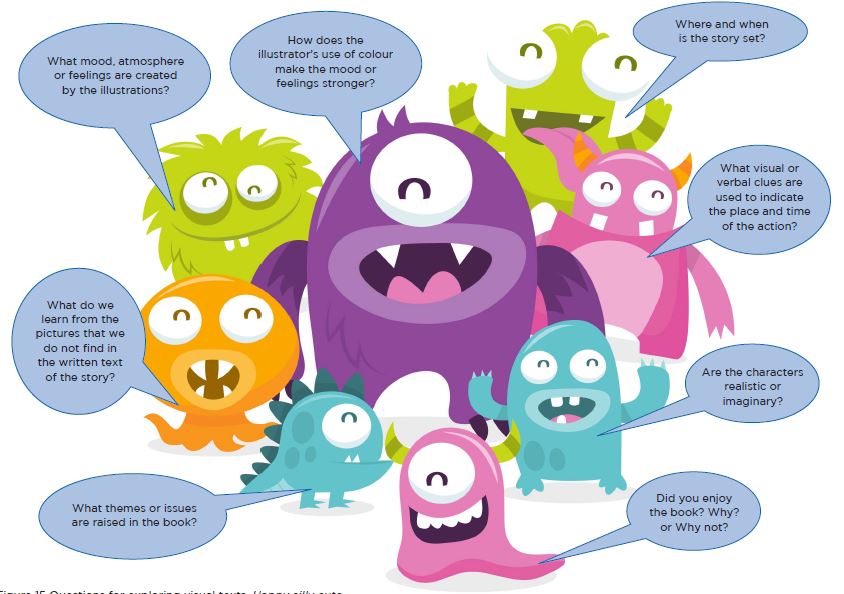 Maurice Sendak: a selection of online learning and teaching resources

Look inside Where the wild things are, Amazon, accessed 14 January 2018.

Maurice Sendak on his childhood and love of movies, The Rosenbach Museum & Library, accessed 14 January 2018.

Sendak, M. 1992, Where the wild things are, HarperCollins, London.

Where the wild things are official trailer,Warner Bros., accessed 14 January 2018.