Two decades after the passing of the 1880 Act, the reform of education was once more at the centre of public interest.

A Royal Commission was appointed with the task of reporting on the 'existing methods of instruction in connection with primary, secondary, technical and other branches of education, and of recommending for adoption whatever improvements might with advantage be introduced into NSW'.

The Commission's reports were given official approval by a conference of inspectors, teachers, departmental officers and prominent educationalists in April 1904.

Primary education was the first to experience the 'new education' movement with significant improvements made in teaching methods and curriculum in the primary schools. However, the basic types of schools such as public, provisional, half-time and house to house remained unaltered.

The Royal Commission showed that countries overseas were expanding their secondary school systems to maintain the supply of qualified people needed in a period of growing industrialisation. Government officials concluded that NSW must do the same. Moreover, more and more parents were demanding to have their children instructed beyond elementary stages of education, and thus it became a major aim in the early part of the 20th century to progress the government secondary school system.

In 1906, 19 district schools were created in country areas to provide the higher branches of learning to regional students without having to bring them to the metro high schools. In essence, district schools were 'superior' superior public schools  - with secondary education in these schools were staffed by university qualified teachers specialising in particular subjects. This was in contrast to teachers in superior public schools who who taught all of the subjects.

The main objective in re-organising secondary education was to provide a secondary school system that offered appropriate forms of higher education to all students who had satisfactorily completed primary school. Officials believed that NSW required a workforce in four major areas; the professions, commerce, industry and the home. It was also assumed that by the time a child was about 12 years of age, it was possible to know which area of the workforce he or she was most suited to. This meant establishing schools to cater for the differing vocational needs of pupils and ensuring that pupils were guided into the schools which most suited their ability.

Students had to sit the Qualifying Certificate to successfully complete primary school. From this examination, those marked with having intellectual ability would proceed to the high school to do academic courses that would funnel students to professional studies in higher institutions, especially university. The remaining pupils were to be channelled into an alternative system of post-primary schools. 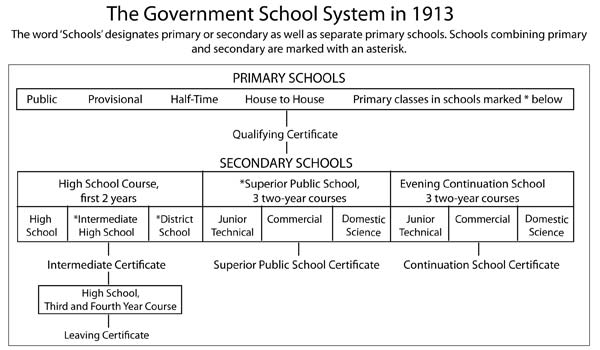 In 1911, fees for high schools were abolished so that they could more easily compete with other forms of post-primary education. Also, for the first time the Intermediate Certificate was introduced for students who completed two years of the high school course of study, and two years later the Leaving Certificate.

Those pupils who did not qualify for the academic courses, whether offered in high schools, intermediate high schools or district schools, were offered two-year courses in pre-vocational schools. Rather than create new schools for this purpose, the superior public schools were refashioned from 1913 onward to include one or more secondary departments. These included commercial, junior technical or domestic sciences.

Commercial schools (mainly for boys) offered a variety of courses such as business principles and economics, and were designed to assists boys entering into a business career after school. The junior technical schools provided courses in technical drawing, woodwork and metalwork for boys who were to take up a skilled trade, whilst domestic science schools (renamed Home Science Schools in 1942) trained girls as homemakers and gave some preparation for employment prior to marriage. These schools, designed to continue a pupil's education beyond the primary level, were known as superior public schools or as continuation schools. In 1923 a fourth type of pre-vocational school was established, the district rural school, which offered courses such as agriculture, applied farm mechanics and rural economics for boys; and home science and horticulture for girls.

The schools were open to students who had completed the primary course and were employed, but wanted to gain additional instruction in subjects related to their job. No primary education sections were attached to the evening continuation schools. The evening continuation schools were well supported, and by the end of 1912 had enrolled over 3,000 students. Their popularity was at its greatest in the late 1920s and early 1930s, after which they declined until they were discontinued at the end of World War II. The evening colleges which replaced them concentrated more on adult education, especially in cultural and handwork subjects.

During the 1920s it became apparent that the specialised post-primary schools needed to become more flexible in order to cope with the relatively large numbers of children who at age 12 or 13 had not formed vocational preferences.

Selection procedures at the end of primary school were modified to assess the future prospects of students and allow for the more accurate placements of students in appropriate types of secondary schools. However, students' vocational interests were difficult to measure and various specialised schools moved towards a system which offered educational courses that would permit a wider occupational choice.

The introduction in 1904 of a conveyance subsidy to assist parents to send their children from outlying areas to central schools contributed to the decline of the smallest government schools, and so did the introduction of correspondence education in 1916. The other major factor was the department's introduction in 1903 of a system of subsidising teachers of very small private schools in remote areas. These schools had on average of nine students enrolled per school - providing minimal education for thousands of children whilst avoiding the expenses of establishing or continuing government schools.

Previously called hospital schools, the first schools for specific purpose (SSP) were established in 1923, whilst the first special school for slow learners was opened at Glenfield in 1927.

Special schools catering for children with physical, intellectual or emotional disabilities did not begin to open until the 1950s and 1960s, with many of these schools operating privately in institutions prior to being absorbed into the government school system. The department began to assume responsibility for more severely intellectually disabled children from the mid-1970s. However, integration policies saw a large number of children with disabilities transferred from special schools to special classes or units, or ordinary classes, in regular schools.

The department eventually classified special schools as SSP, allowing students who required intensive levels of support to complete school up until Year 12.